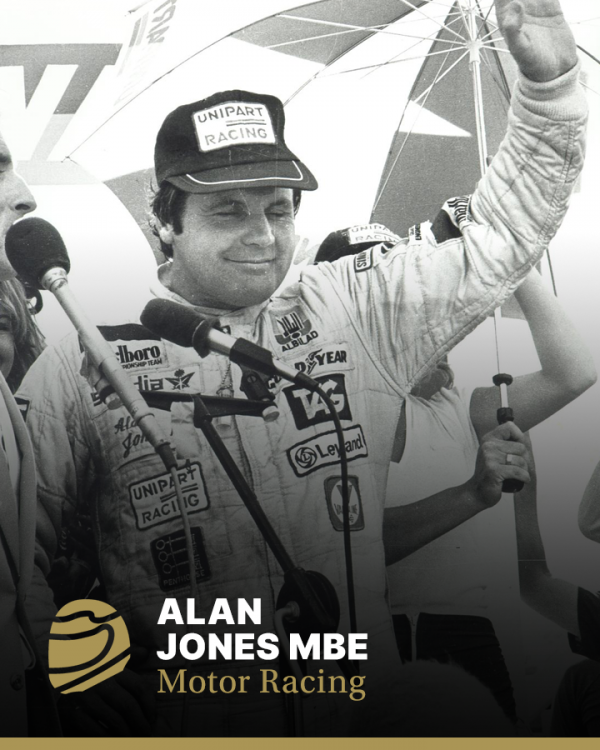 Alan Jones MBE was inducted into the Sport Australia Hall of Fame in 1985 as an Athlete Member for his contribution to the sport of motor racing.

Victorian born, Jones was destined to be a racing car driver, starting off gradually with go-kart competitions in his early years. His first triumph was in the Victorian Junior Go-Kart Championship of 1958/59. Jones had an inspiring path to follow, as his father, Stan, won the New Zealand Grand Prix in 1954 to become the first Australian to win a Grand Prix outside his own country.

Jones made his first attempt on the European circuit in 1969, fighting financial pressures and the challenge of getting a break to show his ability. His determination paid off, and he eventually made his Formula One debut in a privately entered Hesketh in 1975, provided by wealthy racing enthusiast Harry Stiller, who was impressed with the young Australian’s perseverance.

In 1976, Jones joined the John Surtees team, and then moved to the Shadow team after Tom Pryce’s fatal accident in South Africa. Jones won his first Grand Prix in August 1977, beating world champion Niki Lauda for the Austrian title, raced in wet conditions, and became the first Australian to win a major event since Brabham retired in 1970.

This success attracted the attention of Frank Williams, just beginning to fulfil his own racing ambitions, and Jones ultimately surprised everyone by switching to the small and virtually unknown Williams team in 1978.

Jones made his 100th race start in the 1985 Australian Grand Prix in Adelaide, which marked the first time it counted towards World Championship points. At the end of 1986, Jones made his final exit from F1 racing, taking up Australian touring car racing. He won the 1993 James Hardie 12-hour event at Bathurst, as well as the 1995 Winfield Triple Challenge at Eastern Creek, all the time continuing to make his mark on the commentating circuit, which he continues to dominate to this day.

In 1980 he was made a Member of the British Empire (MBE) for his service to motor sport.