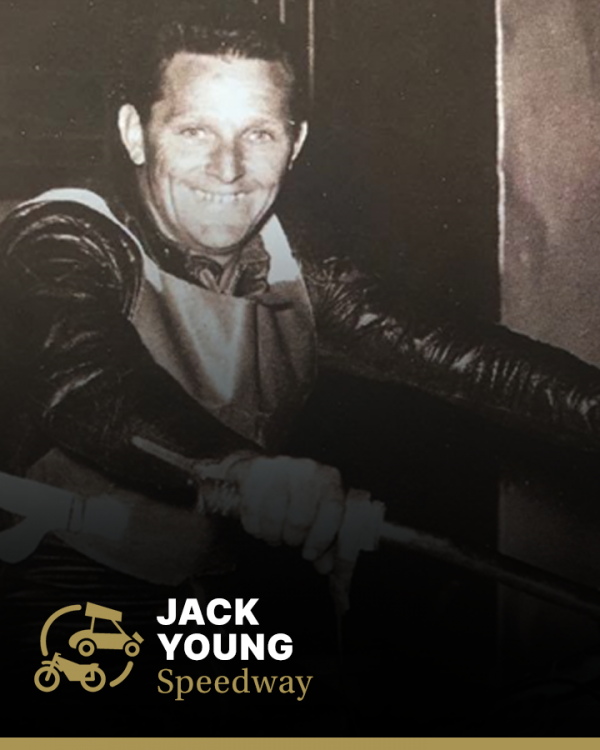 Jack Ellis Young (1925-1987), was Inducted into The Sport Australia Hall of Fame in 1988 as an Athlete Member for his contribution to the sport of Speedway.

Jack was born on 31 January 1925 at West Hindmarsh, Adelaide, third son of London-born chauffeur Walter Andrew Young and his Adelaide-born wife Helene Ann, née Ellis. Walter supplemented the family’s income by establishing a market garden at Flinders Park, where his sons began working while attending the local public school. Jack learned to ride motorcycles from the age of 10 on a circuit around his father’s rows of vegetables. He joined the ‘Findon Mob’ and honed his skills on mudflats later transformed into the suburb of West Lakes.

Jack left school at 14 to become a stablehand. By 1942 he was working as a gardener. On 12 May 1945 at All Saints Church of England, Hindmarsh, he married Joan Mary Carroll. They settled in Flinders Park. Dirt-track speedway racing became Young’s second occupation. He made his début in the stock bike class at Kilburn on 9 May 1947 on a 1926 Harley-Davidson Peashooter. Instantly successful, he scored three places at his first meeting. A week later he took second place in the South Australian Dirt Track Championship. A motorcycle dealer, Fred Jolly, provided him with a Max Grosskreutz Speedway bike and, afterwards, an AJW Speed Fox and other machines.

Young’s greatest asset was a phenomenal sense of balance. Many marvelled at his ability to walk along the tops of corrugated-iron fences. On a bicycle, he could raise the front wheel off the ground and, while balancing there, undo the front axle wing-nuts, remove the wheel and hold it aloft. In speedway he was unique in being able to keep both feet on their footrests when overtaking his competitors on the outside, while they either dragged or led with a steel-capped boot. Dubbed ‘the Armchair Rider’ because his style seemed so effortless and smooth, he was equally at home on clockwise as well as the usual anti-clockwise circuits.

Accepting a contract to ride for the Edinburgh Monarchs, Young went to Scotland in 1949. At his first appearance there he had four wins from four starts. By October he had won the Scottish solo championship and team riders’ championship, represented Scotland against England and served in an Australian Test team that beat the British Lions. Thenceforth, usually accompanied by his family, he spent April to October each year racing in Britain and captaining the Australian Test teams: in the latter role he was unbeaten in thirty-three meetings in succession, averaging seven races a night. At Wembley Stadium on 20 September 1951 he won the world solo speedway championship, becoming the first second-division rider to have gained the title. West Ham secured his services as a first-division rider the following year for a record transfer fee of ?3750.

Young dominated British racing that year and became an idol of London’s East End. On 18 September 1952, in front of a screaming crowd of 93,000, he retained his position as ‘King of the World’, entering the record books as the first rider to win successive world championships. Ten days later an immense crowd greeted him at Adelaide’s Parafield Aerodrome: the triumphal procession escorting him to his home was two miles (3.2 km) long. Young was a place-getter in five other world championships. He won the British match race championship (Golden Helmet) twelve times in succession (1952-53). When West Ham closed in 1955 he took a two-year break, but returned to race for Coventry in 1958. He ceased racing in Europe in September 1961.

Quiet and unassuming, Young rejected offers to set him up in a business in which he could capitalise on his celebrity. While in Scotland, he had found work in a brickyard; he remained content with similar employment in Adelaide, eventually becoming maintenance foreman at the Wills & Williams brickworks in Beverley. His cheerful friendliness and willingness to help others enhanced his popularity. Though refusing invitations to compete for the Australian national title because he preferred to spend his summer holidays fishing, he won a total of fourteen State solo championships. Retiring from Australian competition in December 1963, he was much in demand as a speaker at motorcycle clubs and other men’s groups.

Clouds of the cinders that paved dirt-track circuits had damaged Young’s lungs; he also became a heavy smoker and developed emphysema. In 1978 he quit the brickworks and moved to Port Victoria on Yorke Peninsula. Survived by his wife and their son and two daughters, he died on 28 August 1987 at Modbury and was cremated. He was admitted posthumously to The Sport Australia Hall of Fame (1988) and the Australian Speedway (2008) hall of fame. Young Road, on the former site of the West Ham Stadium in London, is named after him.