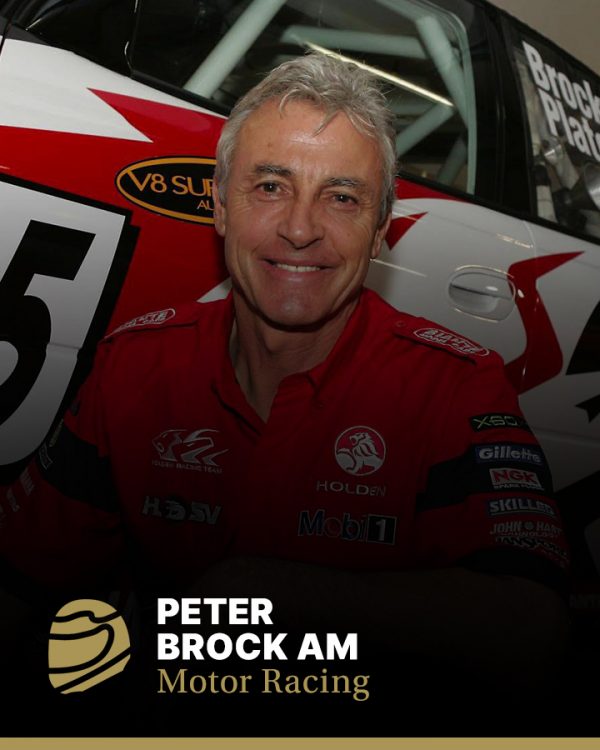 No other driver in the history of Australian motor racing can challenge the record of Peter Brock, who dominated the sport for the last three decades. While Brock’s phenomenal tally of ten victories at Bathurst has been well chronicled, he has also held more pole positions and won more races than any other driver since the inception of the Australian Touring Car Championship in 1960.

Brock’s first car was an Austin 7 that he bought for £5. His driving skill improved greatly at this point of his life because the car didn’t have brakes (or a body, which was removed with his father’s axe). He ended up trying to stop the car by sliding and anticipating the line. Brock made his race track debut in a home made sports sedan, built in a Wattle Glen henhouse during 1967. This unruly beast, a two door Austin A30 with a large Holden engine put Brock on the map with more than 100 victories including the Australian Sports Sedan Championship.

During his early career Brock raced some “wild and woolly” creations including the famous blue 6-cylinder Holden-powered Austin A30. One of his early successes was to become the 1970 Australian Rallycross champion. Brock rose to public attention in touring car racing.

In 1969, the manager of the newly formed Holden Dealer Team, Harry Firth, gave Brock his break with an offer to drive at Bathurst – Australia’s most prestigious endurance road race – in a Monaro GTS 350. At his first effort he was placed third outright. In 1972, driving solo in a Torana XU1, Brock went on to win his first Bathurst title. Brock would win the event a total of nine times (1972, 1975, 1978, 1979, 1980, 1982, 1983, 1984, 1987) a feat that has not been equalled. His 1979 win was remarkable in that he claimed the flag by six laps, a record that (due to changes in race regulations introduced in the 1990s) will never be broken, and broke the circuit lap record on his final lap. In 32 starts at Bathurst he claimed pole position a record six times. His record at this race earned him the titles ‘King of the Mountain’ and the ‘Bradman of Bathurst’.

Along with his record at the Bathurst race, Brock also claimed victory in the Sandown 500 race nine times (1973, 1975-1981, 1984), including a string of seven consecutive wins. He won a total of 37 races during his career in the Australian Touring Car/V8 Supercar championship, a record only eventually equalled by Mark Skaife in 2006. Brock also won the 1979 Repco Round Australia trial, a long-distance endurance race featuring some dirt road sections completely different to the circuit racing where he made his name.

As the lead driver for the Holden Dealer Team in a succession of both 6- and 8-cylinder Holden Toranas and, later, V8 Commodores the smooth-talking clean-cut Brock became a household name that transcended motor racing as he emerged to be one of the best-known modern Australia and New Zealand racing drivers, spoken of with the same reverence as Sir Jack Brabham, Alan Jones and Jim Richards.

Unlike several other Australian drivers, Brock did not seek a full-time racing career outside Australia. He did attempt the 24 Hours of Le Mans twice in privateer vehicles, in 1976 in a BMW 3.0CSL, which failed, and in 1984 in the orange Bob Jane T-Marts sponsored Porsche 956 with co-driver Larry Perkins, running as high as 5th at one stage of the race. The ill-prepared and somewhat underfunded attempt also failed after Perkins crashed mid-race.

In 1997, Brock retired from full-time V8 Supercar racing after an outstanding career where he was applauded as one of Australia’s sporting greats, and an internationally recognised motor racing hero. The UK ‘Motor Sport’ magazine rated Brock in the top 20 most exciting drivers of all time, a list which included the likes of Senna, Schumacher, Fangio and Nuvolari. A huge accolade. In another recent authoritative UK publication, he was voted the second greatest touring car driver of all time.

Brock also worked with the Victorian authorities promoting the campaign against drink driving. The most obvious sign of this association was the racecar number 05 which related to the 0.05% blood alcohol limit in Victoria, which he utilised constantly from the mid-1970s. Most cars he raced in, regardless of the motor racing division, bore this number.

After his nominal ‘retirement’ he made two returns to Bathurst (2002 and 2004) and competed in the Nations Cup for highly-modified and exotic cars in 2004. In 2002, he returned to top-level touring car racing as a team owner with the entry of “Team Brock” into the V8 Supercar category. However, he sold his share in the team at the end of 2003.

He occasionally competed in various enthusiast-level motorsport events such as the Targa Tasmania. His smooth on-camera persona and familiarity to older Australians continued to sell products, including Mobil Oils and Bridgestone tyres.

He achieved a tenth Bathurst win, in a manner of sorts, in 2003, when he won, with Greg Murphy, Jason Bright, and Todd Kelly, a 24-hour endurance race held at Bathurst for “production cars” (in the case of Brock’s vehicle, heavily modified) in a Holden Monaro Coupe.

Due to his extraordinary success on the racing track Brock became the Australian racing driver with the highest-profile as he undertook several media commitments. When not racing he often appeared on New Zealand television screens as a presenter; hosting motoring shows such as TV3’s Police Stop (1996-1998) and TVNZ’s Love that Car (2000). Brock has been the subject of two DVD documentaries—The Legend (1997 – updated 2004) and 35 Years on the Mountain (2005).

Retirement meant little spare time for Brock who since launching the Peter Brock Foundation in 1997 provided support to a wide range of community programs with particular emphasis on the aspiring, yet less fortunate youth.

At 11.50am (AWST) on September 8, 2006, while driving in the Targa West ’06 rally, Brock was three kilometres from the finish of the second stage of the race at Gidgegannup, about 40km from Perth, Western Australia when he skidded off a downhill left-hand bend on Clenton Road for over 50 metres in his 2001 Daytona Sportscar and hit a tree. 61-year-old Brock was killed instantly. His co-driver, Mick Hone, was taken to hospital in a serious but stable condition.

Brock was farewelled with a state funeral at Melbourne’s St. Paul’s Anglican Cathedral, on September 19, 2006. There will also be a permanent memorial at Peter Brock’s “home” raceway, Sandown Raceway, placed there on September 22.

In honour of his achievements and in recognition of his contribution to Australian motorsport, the Bathurst 1000 winner’s trophy now carries his name. In 2006, Craig Lowndes and Jamie Whincup became the first winners of the Peter Brock Trophy.

Brock was made a Member of the Order of Australia (AM) in 1980 for his service to motor racing.