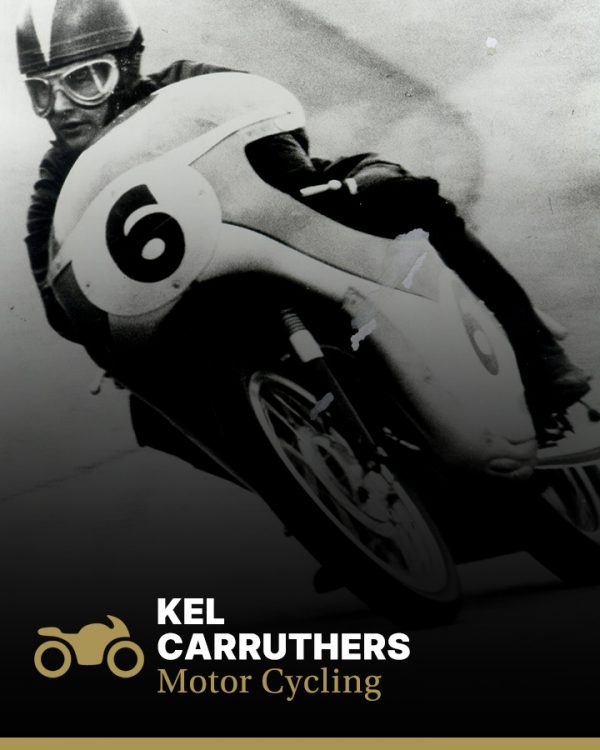 Kel Carruthers was inducted into the Sport Australia Hall of Fame in 1985 as an Athlete Member for his contribution to the sport of motorcycling.

Carruthers was the 250cc Grand Prix Road Race World Champion in 1969. As a racer, he is well known for winning not only the world title, but also for his victories in the 250cc class at the Isle of Man in 1969 and 1970. He went on to have a brief, but highly successful racing career in America before becoming one of the most successful team managers and racing engineers in the history of the sport -heading both national and world championship teams during the 1970s and ‘80s. Carruthers ran the teams on which Kenny Roberts won his three consecutive 500cc World Championships.

Carruthers’ father owned a motorcycle shop and had been an Australian sidecar racing champion. Kel helped out around the shop and learned the mechanical workings of motorcycles at a young age. He started riding at age ten and entered his first race at 12. Carruthers rode a two-stroke Royal Enfield and excelled on the dirt track racing circuit.

Carruthers turned pro when he was 15 and started clubman road racing a year later. By the early 1960s, he was the top racer in Australia. From 1962 to 1965, he won the 125cc, 250cc, 350cc and 500cc national championships. Carruthers rode a wide variety of racing machines, from factory-backed Honda RC161s and CR93s to 500cc Manx Nortons.

By the mid-1960s, Carruthers had done all he could do in Australia, so he loaded his family on a ship in the spring of 1966 and sailed to Europe, where he lived in the summer months racing on the GP and international racing circuit. As a privateer, he had to adapt to life in Europe while living on the road in a travel trailer, and he had to learn to be a hard-nosed negotiator.

Carruthers progressed and by 1968 he finished third in the 350cc World Championships riding Aermacchis. At the end of 1968, Carruthers almost got the break of his life. MV Augusta had tried to get Mike Hailwood to ride at the Italian GP at the end of the year, but due to contractual problems he couldn’t, so Carruthers was invited. Unfortunately for Carruthers, Hailwood was released from Honda at the last minute and took the ride with MV.

In 1969, Carruthers became the Aermacchi factory rider in the 125cc, 350cc and 500cc classes. At the Isle of Man, Benelli asked Carruthers to ride the company’s 250cc racer after Renzo Pasolini had been injured. Carruthers got permission from Aermacchi and won the 250cc class at the TT that year.

Benelli was thrilled, since the win was the company’s first major victory since the 1965 Italian Grand Prix. In an almost unheard of arrangement, Aermacchi allowed Carruthers to sign with Benelli to race the 250cc the rest of the season. So Carruthers found himself a factory rider for two different companies at the same time. He went on to win the 250cc Grand Prix in Ireland and Yugoslavia to give Benelli its second world title and first since 1950.

Travelling to America to race Daytona in 1970 would prove to be a turning point in Carruthers’ life. That year he won the 250 race there and came close to winning the Daytona 200. Carruthers went on in 1970 to finish runner-up in the 250cc and 350cc world championships riding Yamahas.

Doing road races exclusively in 1971, Carruthers still managed to finish eighth in the American Motorcycling Association (AMA) Grand National Championships, winning his first AMA national at Road Atlanta in April. Besides the nationals, Carruthers won a slew of non-national lightweight races in the class that would later become the AMA 250 Grand Prix series.

At the end of 1971, Kawasaki tried hard to hire Carruthers, but Yamaha wanted him even more and bettered the offer Kawasaki made. In 1972, Carruthers continued to ride, but his emphasis was beginning to shift. He was working with a rookie expert named Kenny Roberts, taking care of his motorcycles and helping him learn the ropes at the road races.

By 1973, Yamaha had contracted Carruthers to run its US road racing team and while Carruthers actually had a very good season on the track (runner-up at Daytona and Road Atlanta and winner at Talladega, Alabama) it was becoming clear that his racing career had become impractical. Under the direction of Carruthers, Yamaha’s racing team was the most successful in the United States during the mid-1970s.

In 1978, Carruthers and Roberts left for Europe to contest the 500cc Grand Prix for Yamaha. Roberts won the world championship in his first full year and gave Carruthers much of the credit for his success. He continued working as team manager and engineer for various teams on the GP circuit through 1995. By the end, he no longer found the GP world as rewarding as it had once been.

In 1996, he was lured away from motorcycling to head up the Sea-Doo watercraft factory racing team for two years. Again, Carruthers found success, his teams winning national and world titles. However two years later Carruthers returned to motorcycling to run the Chaparral Yamaha national Supercross and motocross team and later the Southern California company’s AMA SuperSport road racing team.