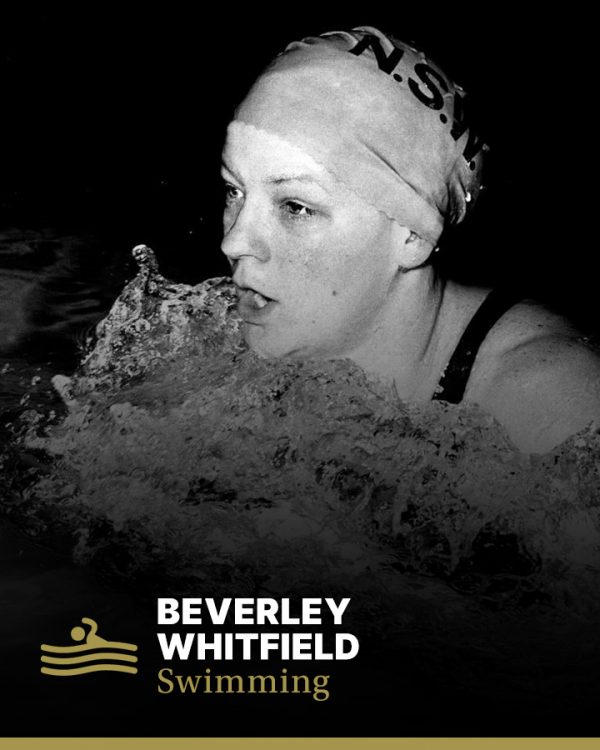 In an essay for school, four years before the 1972 Munich Games, Beverley Whitfield wrote, “If I could fulfill my wish I would be in Munich, Germany, for the 1972 Olympic Games and win a gold medal as a member of the swimming team.” It was a dream she pursued with much intensity.

Whitfield grew up in Shellharbour, a coastal town near Wollongong, but she eventually went to Sydney, then to the American town of Midland, Texas. From the age of 11, she was a disciple of Terry Gathercole, who was acknowledged as the finest breaststroke coach in Australia. In 1969, when Gathercole accepted a post as Midland’s swim coach, Whitfield joined him for six months, boarding with them and attending a local high school. It was a costly adventure, unassisted by any kind of sponsorship, paid for by her father and her family. Later on her return to Australia, Gathercole arranged for her to join Don Talbot’s squad. At the 1970 Edinburgh British Commonwealth Games, she won individual gold medals over 100m and 200m breaststroke and shared in a medley relay gold medal.

As her appointment with the dream in Munich approached, she indulged in creative visualisation, living every stage of every coming race in her mind. It is an approach which sport psychologists have used often in more recent times, but for Bev, it was a home made, do it yourself affair. She knew she was closing on her peak, and was determined to make the Munich experience the most memorable time of her life.

She was entered in the 100m and 200m breaststroke, as well as the medley relay (in which the Australian team did not progress beyond the heat). The rival she feared most was the Soviet’s Galina Stepanova, who had won gold at the 1964 Tokyo Olympics, and silver and bronze at the 1968 Mexico City Olympics. In their one encounter in London in 1971, the Russian had won convincingly. Both Talbot and Whitfield regarded the 200m as her main chance. Talbot was frank, he did not expect her to progress beyond her heat in her first race, the 100m. Her best time for the 100m before Munich was 1min 18sec. She cut it to 1:16.3 in the semi-final, and further to 1:15.73 in the final, in which she caused an upset by winning bronze behind Cathy Carr (USA) and Stepanova.

Talbot’s instruction for the 200m was simple, “Don’t worry if Stepanova is way out in front after 100m. Just keep building up the pressure, and apply it most in the third lap. The third lap can be the winner for you.” In fact, Stepanova had a huge lead at the half way mark, Whitfield was last at the 50m mark and fourth at the 100m mark. She made her impact in the crucial third lap, as her opponents were beginning to tire, and by the beginning of the last 50m was still fourth, but with plenty of sprint left in her. In an outrageous final lap she powered past three opponents to take the lead 20m from home, then reached the finish to win in 2:41.71, three seconds better than her previous best.

Later at the 1974 Christchurch British Commonwealth Games she was touched out by 0.74 seconds in the 200m breaststroke by Pat Beavan of Wales. The Australian medley team won silver in the 4x100m relay.