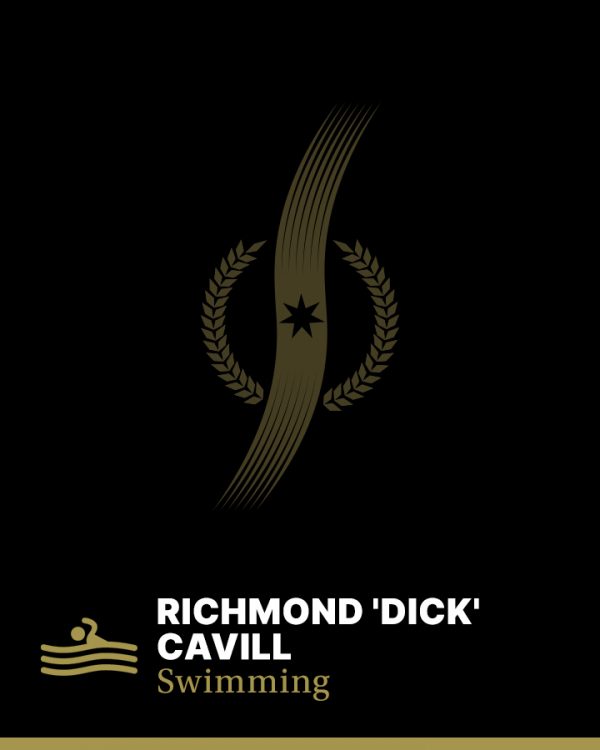 The youngest of the famous Cavill clan, Richmond, or Dick as he was more commonly known, was probably the best swimmer of them all. Early conservative swim judges classed him as one of the three best Australian swimmers along with Freddie Lane and ‘Boy’ Charlton. He held 18 Australian, two English, and 22 New South Wales titles from 1900 to 1904. At his peak, he had no peer in the world at all distances from 50yds to a mile.

More than any other individual, Cavill is responsible for the independent arm stroke and leg kick of the crawl stroke, and was credited with introducing it to England. He was the first person to use it in competition when in 1899 he won the 100yds NSW championship.

Known as ‘Playboy Dick’ or ‘Splash’, he claimed to have been first to break a minute for 100yds freestyle, but in an official match race in July 1902, he lost this honor in England to fellow Australian, Freddy Lane. Lane’s victory was considered just dessert for Cavill who horrified sportsmen with his training diet of ginger beer, ice cream and brandy snaps.

Swimming his last race as an amateur in Australia in 1904/05 he beat Barney Kieran over 440yds and set a new world record of 5:25.00sec. As a professional, Cavill lived and coached in New Zealand for a time before travelling to the United States. There, he travelled around the country challenging any local swimmer to a race, but Cavill would have his feet tied together. It didn’t make a difference, Cavill always won. He returned to Australia in 1913 and for a time played ‘Father Neptune’ in Wirth’s circus.

In later life, he ran the Balmoral Baths in Sydney, but died from a sudden heart attack while giving a swimming demonstration on May 2, 1938.

In 1970 the Cavill family was honoured in the International Swimming Hill of Fame at Fort Lauderdale, Florida, United States of America.