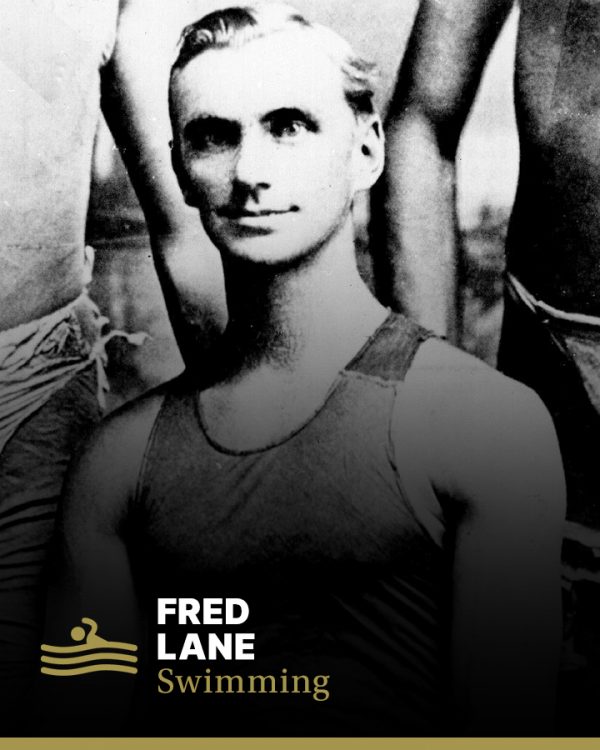 Australia had three representatives at the 1900 Paris Olympic Games, Fred Lane (swimming), Stan Rowley (athletics) and Donald Mackintosh (shooting) and they shared much success. The IOC now accords all three of them symbolic gold medal status, even though the Olympic gold medal did not arrive until 1904.

Lane was an amateur in the oldest tradition. He devoted himself full time to sport because he could afford to do so. His benefactor was his father, a successful businessman. Lane made several private trips to Britain for the English titles, which at the turn of the century had the status of world championships, and took in the Paris Games during one of them. Lane, quite a small man, came away from Paris weighed down by his prizes, two huge bronze pieces of sculpture.

Lane became the first of Australia’s impressive line of Olympic swimming champions when he won the 200m freestyle in the muddy waters and moody currents of the Seine at Asnieres. He followed that up by winning another event which disappeared from the Olympic program after 1900, the 200m obstacle race, where the competitors were required to clamber across rowing boats and swim under punts.

Freddie was one of eight children, who lived on the water’s edge at Miller’s Point, Sydney. He competed at the time when the sport of swimming was undergoing fundamental changes, all aimed at yielding greater speed. Lane was a natural in the water and at the age of eight, won his school’s 100yds event. Later, at Sydney Grammar he quickly rewrote the entire record book, winning all six events in one carnival. At 18, he won the New South Wales 220yds title against a talented field, including Percy Cavill. A year later he became the Australasian 100yds champion with a swim of 67.7 seconds in Christchurch, New Zealand.

He dominated the 1898/99 season in NSW, winning all but one of the state freestyle titles. In the pre-crawl era, Lane swam a double overarm similar to the trudgen, but with a narrower kick. It was considered a good sprint stroke but much too strenuous for distance until Lane won the NSW mile title with both arms over the water for the entire distance. This was in 1899 at Wagga Wagga in the Murrumbidgee River, and the following month set a national 440yds record. But Englishmen kept the swim records of that day and Lane’s incredible performances, like those of Barney Kieran, who followed him, were suspect unless swum in England or at least in Europe. Lane was shipped off to England to prove a point and almost immediately he set a world record of 2:34.8 for the 220yds.

His technique was to sprint about eight metres before each turn to gain an advantage with his speedy pivot turn. It was after his second successful visit to Britain in 1900 that Lane, aged 20, travelled to Paris for the Olympics. He learned on arrival that the 100m freestyle, his preferred event, had been dropped from the program in favour of the 200m race, which would be swum in one haul with no turns. In the 200m he found himself lined up against Zoltan Von Halmay of Hungary, a fine swimmer who went on to win two gold medals at the 1904 St Louis Olympics.

The Hungarian was particularly fast over the early stage of the race but couldn’t maintain his pace under pressure. After 100m, Lane drew away from the other competitors and challenged the Hungarian. Neck and neck, the Australian managed to pull away and touched the end first in a time of 2:25.2 seconds. As an Olympic record, it stood until 1968 when Michael Wenden set a new record of 1:55.2 seconds (the event was removed from the Olympic program after 1904 until 1968).

In the 200m obstacle course, Lane had a certain advantage, having grown up around boats on Sydney Harbour, he knew that it was easier to go over the boats at the stern, whereas most of his competitors fought their way over the sides. His time in the obstacle course was 2:38.4 seconds.

In three seasons of competition in the British Isles, Lane won five English ASA championships, for distances ranging from 100yds to 440yds. Apart from his two Olympic titles, he won three Australasian championships and set seven world records. But the swim, which Lane claimed was the greatest performance of his life, took place in Manchester in July 1902, not long before he retired at the age of 22. Competing against the formidable Englishman Rob Derbyshire and fellow countryman Dick Cavill, he became the first man in the world to swim 100yds in one minute. In October of that year at Leicester, Lane further astounded the swimming world by breaking a minute, with 59.6 seconds.