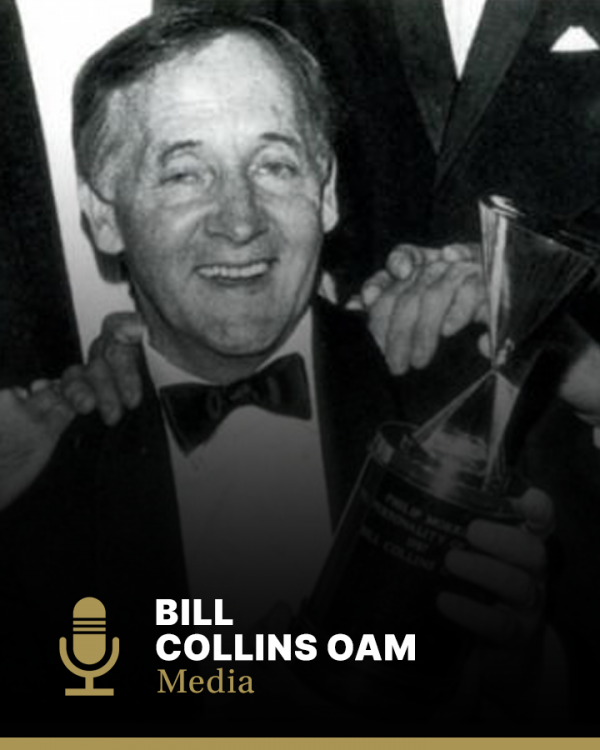 Known as the ‘Accurate One’, Bill Collins is one of the legends of Australian sports broadcasting. His voice graced the airwaves for over three decades, informing and entertaining his audience, promoting all three codes of the racing industry, and helping to raise Australian race calling to such a high standard that it could be regarded as an internationally renowned art form unique to this country.

Collins joined radio station 3DB in 1953 as an announcer and third string race caller to Eric Welch and Dick Cranbourne, he was appointed Chief Race Caller in 1954 and held the reins there until 1988 when, in the twilight of his career, he moved to 3UZ after DB dropped racing from its format. He was also appointed course commentator at Caulfield and Sandown racecourses, enlivening the day for race goers for fourteen years. During that time he brought to his listeners the glamour and excitement of a record 34 Caulfield and Melbourne Cups, an outstanding feat unlikely to be equalled in the future. His expert commentary was also applied to many hundreds of harness racing and greyhound meetings.

On the international scene Collins was, in 1958, the first Australian to make a direct race broadcast from the United States. He called three English Derbies, and was given an open invitation by South Africa to broadcast their Spring Carnival of Racing every season -an invitation he accepted five times. He was a great ambassador for his country and made such an impact in South Africa that he was asked to conduct a seminar to assist local callers.

His involvement in racing was not restricted to calling. He was a trotting journalist for the Herald and Weekly Times and Sunday Press for many years, co-compare of ‘The Penthouse Club’ that brought harness racing to television, and for almost two decades he was a member of the popular ‘World of Sport’ program which he hosted in Ron Casey’s absence. Collins was also active in racing administration, being the first racing media representative to be nominated to a statutory authority when he was appointed to the Harness Racing Board in June 1985. He served with that Board until May 1987 when he was appointed Chairman of the Greyhound Racing Control Board, a position he held with great proficiency.

He was a member of the Victorian TAB for six years, and served on the Board of radio station Sport 927. Collins’ outstanding knowledge of the racing and betting industries made his opinions widely sought by both the industry and the government. He was presented with the Bert Wolfe Award for excellence for his chosen field in journalism and was declared the Racing Personality of the Year in 1987.

Although best known for his association with racing, Collins made other valuable contributions to sport in Australia. As Chairman of the South Melbourne Football Club in 1981, he guided the club through a most difficult time associated with a lack of on-field success, and its relocation to Sydney as the Sydney Swans. In 1956 Collins was selected as a commentator at the Olympic Games in Melbourne, a task he accomplished with skill. Indeed his success was such he was also appointed to the international commentary teams for both the 1976 Montreal and 1980 Moscow Olympics.

Collins was recognised for his enormous contribution to racing and the media in this country when he was awarded the Medal of the Order of Australia (OAM).