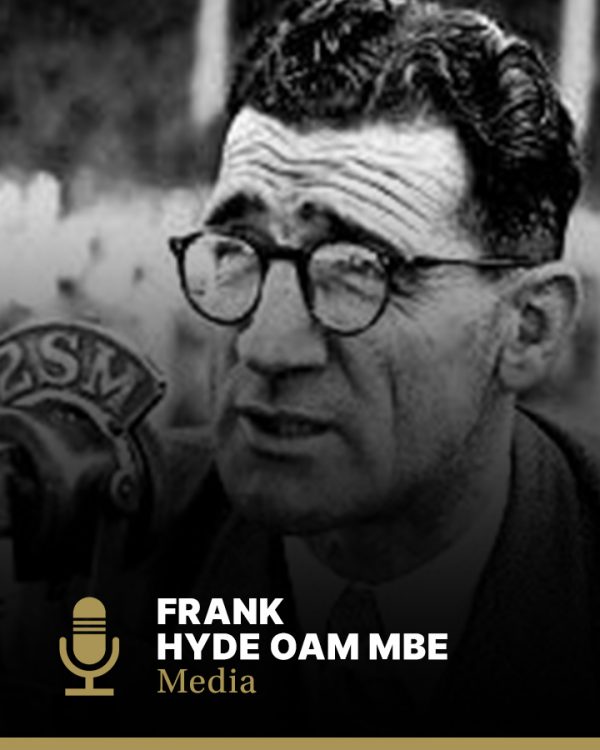 Frank Hyde’s contribution to rugby league and to society has been enormous, but he is best known as the unchallenged doyen of rugby league radio broadcasters. His voice is synonymous with the game from the 1950s to the 1980s.

Hyde began playing rugby league at school in 1925 and made his first-grade debut in the final rounds of 1936 for Newtown. In 1937 Newtown blitzed all their opponents to take the City Cup (held over the second half of the season) with a win in the final over Easts 57 to 5 – the greatest ever winning margin in a Sydney competition final. Due to the residential rule, he moved to Balmain in 1938 where he was appointed captain and won the premiership in 1939. He gained selection for New South Wales against New Zealand and Queensland in 1938 and played for Metropolitan in 1939.

The war needs saw Hyde transferred to work in Newcastle for the 1940 season and he took up a captain-coach role with Waratah Mayfield. He gained selection for Country against City, the team not getting together until the evening before the game. Hyde returned to Balmain for 1941, but moved to North Sydney in 1942, winning the premiership in 1943, their first in 21 years.

As a broadcaster, Hyde was seen as a trailblazer, revolutionising the way the game was called. His signature line was “It’s high enough, it’s long enough and it’s straight between the posts”. Hyde ruled the airwaves with radio station 2SM for 31 years, never being beaten in the ratings. Sports broadcasters in Australia today will tell you they owe him a great debt.

Other than a rugby league commentator, Hyde was also a referee, a coach, an administrator, an “Immortal” selector, a recording artist, a tour guide, and a boxing commentator.