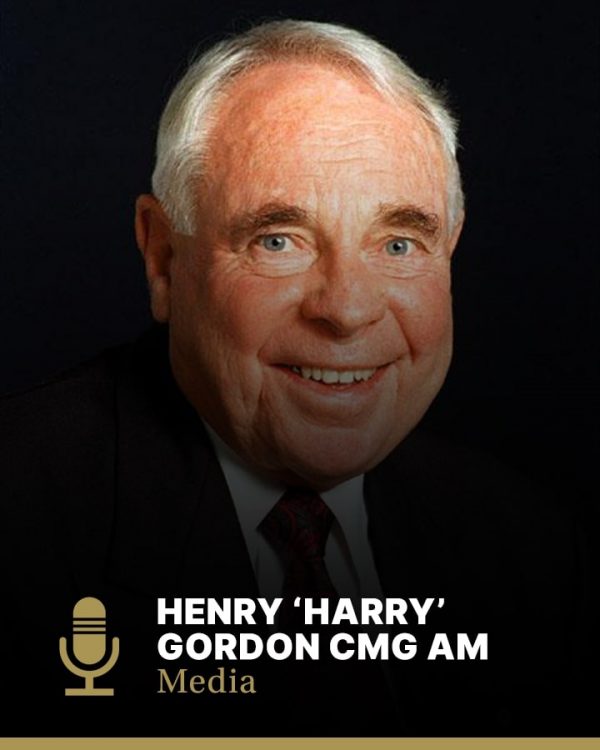 Harry Gordon has had a distinguished career as a journalist, sportswriter, foreign correspondent, editor, author and historian. As a young war correspondent he served with Australian troops in the Korean war, and later became a regular contributor to the New York Times Magazine. During his 20 years as an editor he held such senior posts as Editor of the Melbourne Sun, Editor-In-Chief of the Herald and Weekly Times, Editor-In-Chief of Queensland Newspapers, and Chairman of Australian Associated Press.

He has written 14 books — one of which, An Eyewitness History of Australia, won the National Book Council’s First Prize for Australian Literature.

As a columnist and featured sportswriter in newspapers and magazines, Gordon wrote mostly about swimming, track and field, tennis, boxing, Australian football and the Olympics. His long association with the Olympic movement began when he covered his first Games, in Helsinki in 1952. Seven of his books have been about sport, including the acclaimed histories: Australia and the Olympic Games and The Time of our Lives (both about the Olympics), and The Hard Way, the history of the Hawthorn Football Club. He is also Dawn Fraser’s biographer.

Gordon helped plan media facilities for the 1956 Melbourne Olympics, and was on the Organising Committee (Chairman of the Media Division) for the 1982 Brisbane Commonwealth Games. Since 1992 he has been official historian of the Australian Olympic Committee. At the request of the AOC, he had the task of naming streets and boulevards around the main Olympic arenas, throughout the Olympic Village and at all venues at the 2000 Sydney Olympics. He also helped plan the Sydney 2000 Torch Relay.

In 1999 the AOC conferred on him its highest award, the Order of Merit. In 2001 the International Olympic Committee awarded him its highest honour, the Olympic Order, for outstanding service to the Olympic cause. In 2002 he received Australia’s inaugural award for Lifetime Achievement in Sports Journalism (conferred by the Australian Sports Commission and the National Press Club). In 2003 the Melbourne Press Club presented him with its Lifetime Achievement in Journalism Award, and he was inducted as a Member of the MCG Media Hall of Fame. In 2006 the International Society of Olympic Historians honoured him with its ISOH Award — the supreme award in its field, and the second ever made.

Gordon is a Member of the Selection Committees of both The Sport Australia Hall of Fame and the Australian Football Hall of Fame.