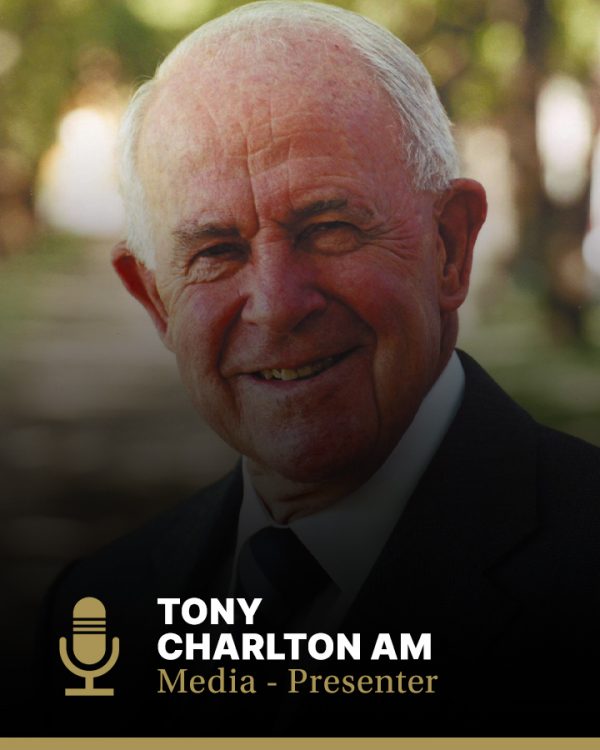 For more than half a century – since he joined Channel Nine’s broadcast team for the 1956 Olympics in Melbourne – Tony Charlton has been bringing the drama of great sport into the lives of Australians.

After the Games he switched to Channel Seven as one of its inaugural football commentators and so began a close relationship with a game that received huge exposure through radio, the new medium of television and the written press.

Excelling in the electronic media, he left Seven to return to Channel Nine, where he was commentator, producer and presenter of football shows for 11 years before turning his professional attention to his favourite pastime – golf.

From 1970 to 1983 he was promoter and tournament director of the Australian Open, the PGA Championship and the Victorian Open. His CV also includes TV coverage of three Olympics and two Commonwealth Games, as well as 30 years as MC of the popular Caltex Sports Star of the Year series.

From 1988 to 2008 Charlton was MC of the Prime Minister’s Olympic Dinner, a mammoth fundraising event for our Olympians. He remained closely connected to the Olympic movement, compering special anniversaries of the 1956 Games and other events for many years.

He also compered the opening by Prime Minister John Howard of the Australia Cricket Hall of Fame in 1996 and MCG Media Hall of Fame induction dinners from 1999-2006. Since then he has been presenter at a host of sports functions, notably at the MCG.

Tony has given his time generously and freely to sporting and charitable causes including the Alfred Hospital, Victorian Olympic Council and the Australian Commemorative Plaques group which marks sites of Australian military involvements around the world.

An outstanding Australian, Charlton was awarded an OAM in 1990 and an AM in 2003. In 2008 he received the Order of Merit from the Australian Olympic Committee.