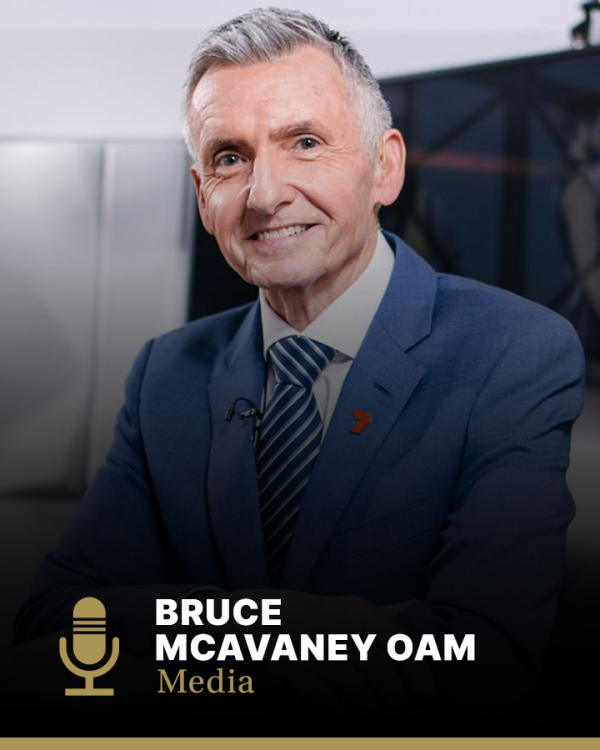 Bruce McAvaney OAM was inducted into the Sport Australia Hall of Fame in 2002 as a General Member for his contribution to sports media.

Justifiably dubbed ‘The Master Sportscaster’, Bruce McAvaney remains a commentary icon who has presented many high-profile sports throughout his career including Australian Rules Football, horse racing, athletics, motor racing, tennis, golf, and Olympic and Commonwealth Games. He was the voice of a sporting generation and is synonymous with major sporting events in Australia – the AFL Grand Final, Melbourne Cup, Australian Open tennis, Test cricket and of course, the Summer Olympic Games – he’s covered each Olympiad from Moscow 1980 through to Tokyo 2020, with the exception of the 2012 Games – and his trademark enthusiasm in commentary is instantly recognisable.

McAvaney grew up as the son of an Adelaide accountant and developed an early interest in sport and race calling. He attended Woodville High School before he spent five years working for Telecom, before he took a trip to Melbourne in 1976 that kick-started his media career. There, he met Kevin Hillier, a race caller from Adelaide who suggested McAvaney call him when he returned home. This meeting led to McAvaney joining Adelaide radio station 5DN where he called horse races and hosted his own sports show. In 1978, he moved to television and joined ADS-7 as a sports presenter and producer of their weekly Racetrack show. His first big break came in 1980 when workmate Sandy Roberts went to Moscow to cover the Summer Olympic Games for Channel 7 and McAvaney was chosen to host the Adelaide end of the telecast.

In 1981 McAvaney moved into the Chief Sports Presenter position at 7 News in Adelaide and lead the station’s telecasts of the South Australian National Football League where he called the 1983 SANFL Grand Final with former player Robert Oatley. At the end of 1983 he joined Melbourne’s Channel 10, where he read the nightly sports news alongside cadets Eddie McGuire and Stephen Quartermain, who worked under his tutelage.

The following year he attended the 1984 Los Angles Olympic Games for Ten and commentated on track and field events. He was the network’s secondary host throughout the event. In 1985 McAvaney called his first Melbourne Cup for 10 and hosted various major sporting telecasts for the network throughout the year. Between 1985-1988 he’s credited with commentating and hosting a range of events, including the 1986 Commonwealth Games in Edinburgh, the 1987 World Athletics Championships in Rome and the 1988 IAAF Grand Prix in Berlin. In 1988 he received significant acclaim as the co-host of Ten’s telecast of the Seoul Olympic Games.

In 1989, McAvaney won the Penguin Award for ‘Best Sports Presenter’ and an International Olympic Committee Media Award and negotiated a two-year premature end to his contract with Channel 10 to join Channel 7, on the condition that he could cover the 1992 Summer Olympics in Barcelona. In November that year he established Sportsworld which quickly became the highest rating sports show on television. Over the next few years, McAvaney revelled in the huge amount of sport being televised by Channel 7 and commentated or hosted a range of events – the AFL Grand Final and Brownlow Medal, the Bathurst 1000, Australian Open and Davis Cup tennis, President’s Cup and Australian Masters golf, and World Athletic and Swimming Championships.

In 2006 he joined Melbourne radio station 3AW as part of their Melbourne Commonwealth Games teams. He called athletic events at the Games – that included an epic call of Craig Mottram’s silver medal in the Men’s 5000m – and co-hosted nightly shows Sports Today and The Games Today, throughout the eleven days of competition. He continued his run of Olympic and Commonwealth Games coverage for Channel 7 through to the 2008 Beijing Olympics, 2016 Rio Olympics and the 2020 Tokyo Games, which was held in 2021 due to the COVID-19 pandemic.

Throughout this period, he maintained his position as Australia’s premiere AFL commentator and called over 1000 AFL matches – which included 20 Grand Finals – and was the regular host and MC for the annual Brownlow Medal count between 1990 – 2018. His final call of an AFL match was the 2020 Grand Final – the first held outside of Victoria, due to the COVID-19 pandemic – between Richmond and Geelong.

His well-known and meticulous commitment to research, and in-depth knowledge of the sports and athletes he covered, often resulted in awards; notably the inaugural TV Week Logie for Most Outstanding Sport Broadcaster in 1999, which he won ahead of Legend of Australian Sport, Richie Benaud OBE, racing caller Johnny Tapp and SBS soccer host Les Murray.

Among a plethora of memorable moments, McAvaney added a layer of understanding and excitement to some of Australia’s biggest and most well-known sporting events, as well as individual achievements that include: