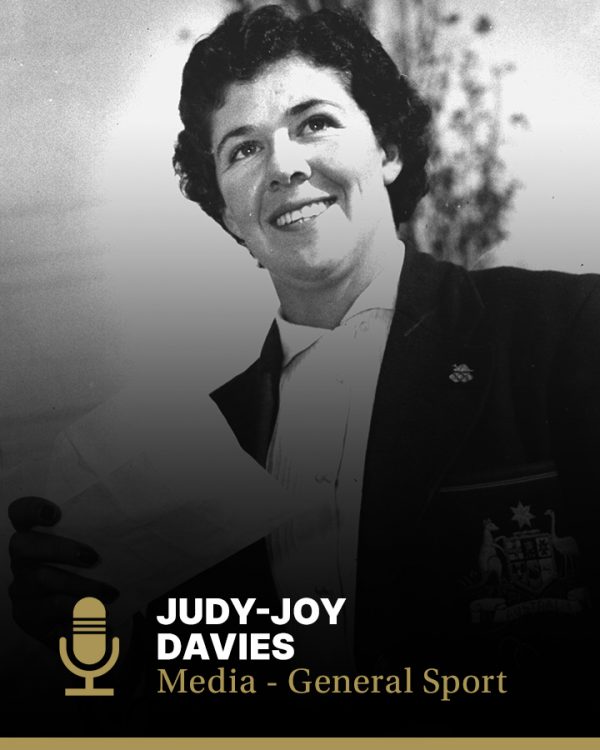 Judy Joy Davies was Inducted into The Sport Australia Hall of Fame in 2011 as a General Member for her contribution as a sportswriter.

Whilst her own Olympic and Empire Games swimming career was noteworthy (Davies had a successful swimming career with three Empire and Commonwealth gold medals, Olympic bronze and a world record), it was while plying her subsequent career as a journalist covering sport for more than 34 years that Davies made her mark.

Early women sports journalists tended be confined to reporting women’s sport. Davies was one of the first women journalists to break into covering all sports when she started working with the Melbourne newspaper The Argus (then part of the UK Daily Mirror Group) and covering the 1954 Commonwealth Games in Vancouver and then the 1956 Olympics in her home town of Melbourne.

When the Argus ceased publication in 1957 she joined the rival Sun News Pictorial where she was to cover local and international sport for the next 31 years, in the process establishing a rapport with generations of Australian swimmers and athletes.

Over a 34 year career with the Argus and the Sun News Pictorial she covered nine Olympic Games and a similar number of Commonwealth Games (or Empire Games as they were earlier called).

Once she joined the Sun News Pictorial, part of The Herald and Weekly Times media group, her copy of major events like Olympic Games was used by newspapers around Australia. She became a truly national sportswriter.

While her original expertise was in covering swimming, she rapidly extended that to athletics and then progressively to cover a wide range of sports, including winter sports. She was lauded by competitors and administrators in many disciplines for the time and space she gave to sports which traditionally were not given wide media coverage.

Judy Joy Davies began her sports writing career in an era before satellite television when print was the medium through which a large part of the population got news of major events. With the development of electronic media with its instant coverage, her writing evolved to capture more of the human stories and the drama behind the results.

She was widely respected by both editors and athletes and in 1982 was awarded the National Press Club Award for Sports Journalism.

Prior to sports writing, Davies had a successful swimming career. From 1946 to 1952 she won seven consecutive national titles in backstroke and won freestyle titles from 100 yards to 880 yards. In all, she won 17 Australian titles in backstroke, freestyle and medley and set a world record for a mile (1760yards) at the 1953 Victorian championships.

On the international scene she took out the Bronze in the 100 metres backstroke at the 1948 London Olympic Games (setting an Olympic record in the heats) and becoming the first Australian, male or female to win an Olympic medal in that stroke. She was an Empire and Commonwealth Games Champion in 1950 taking out the Gold in the 110 yards backstroke and as part of the 4x110yd freestyle and 3x110yd medley relay teams. At the 1952 Olympic Games she made the semi finals of the 400m freestyle.