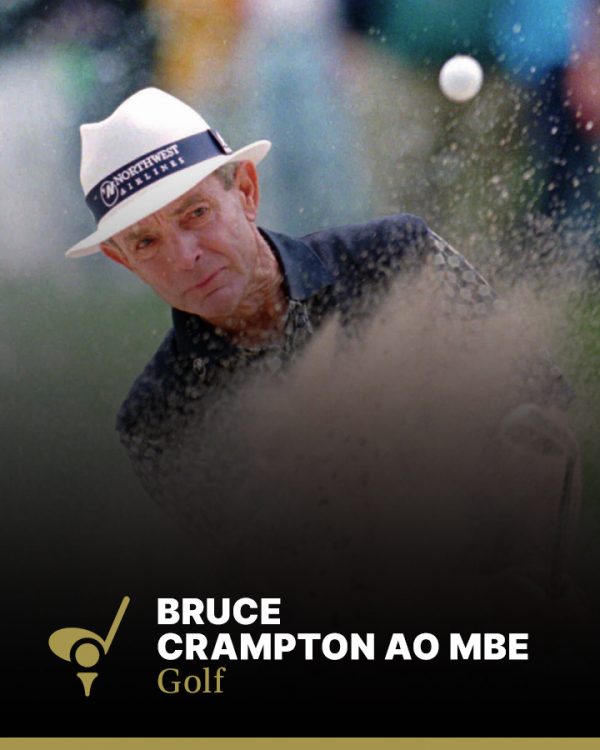 Bruce Crampton AO MBE was inducted into the Sport Australia Hall of Fame in 2001 as an Athlete Member for his contribution to the sport of golf.

Bruce Crampton was the first Australian golfer to win more than $1 million in prize money on the US PGA Tour, placing him among famous names such as Arnold Palmer, Jack Nicklaus, Billy Casper and Lee Trevino. He was known as the original “Ironman” for his long playing schedules, including a 38 consecutive match stretch. Between 1961 and 1977 he won 14 tournaments on the US PGA Tour.

Though he never won the British or American Opens, Crampton won -apart from the 1956 Australian Open -the New Zealand PGA Championship in 1954, the Philippines Open and the Far East Open in 1959, and the Hawaiian Open in 1969, proving he could be successful away from the American main land.

Crampton made his first visit to the USA after winning the 1956 Australian Open at the age of 20, and though always threatening to win a tournament, had to wait until 1961 when he scored a one stroke win in the Milwaukee Open Invitational. In 1965 he created a record by winning three successive American tournaments, the rich Bing Crosby extravaganza, which up to that time had never been won by someone from outside the USA, the Colonial National Invitation, and the 500 Festival Open Invitation.

1973 was by far Crampton’s most successful year with four tournament wins, and five placings as runner up. He won the Phoenix Open, the Dean Martin Tucson Open, the Houston Open, and the American Golf Classic. He finished second to Jack Nicklaus four times in Major Championships; the Masters and US Open in 1972, and the US PGA Championships in 1973 and 1975.

In 1973 he became the first foreign player since Harry Cooper of England to win the Vardon Trophy for the lowest scoring average on the US Tour and again won this in 1975. He had ten holes-in-one during his professional career.

Crampton was inducted into the Texas Golf Hall of Fame in 1992 and is a member of the New South Wales Hall of Champions.