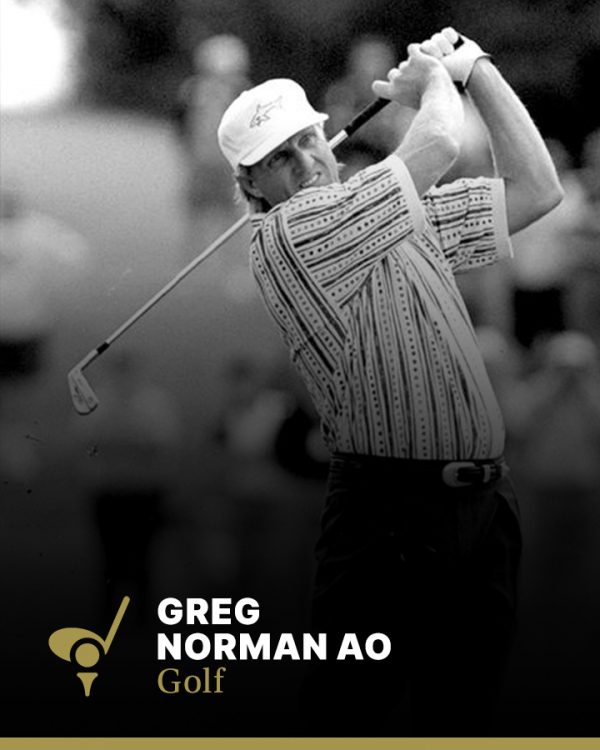 Greg Norman AO was inducted into the Sport Australia Hall of Fame in 1988 as an Athlete Member for his contribution to the sport of golf and was elevated as a Legend of Australian Sport in 2007.

Norman’s interest in the game started with an unusual offer to his mother that he caddy for her during a regular mid-week game. Following the round, he asked if he could borrow her clubs and set out on his own. What his mother could not have imagined was that her son who had never taken an interest in the game would become one of the greatest golfers the game has ever known.

Just two years removed from that first day at Virginia Golf Club in Brisbane, Norman was a scratch golfer, averaging par or better each time he played. For the next few years, he spent time working as an Australian PGA trainee, playing amateur and open tournaments throughout Australia before turning professional in 1976 — just six years after caddying for his mother. The first professional tournament he won was the 1976 Westlakes Classic in Queensland.

From the days in 1975 when he made $38 a week working as a trainee in the Royal Queensland golf shop, Norman has earned more than $1 million five times on the US PGA Tour, including three Arnold Palmer Awards as the tour’s leading money winner in 1986, 1989 and 1994. He was also the first person in tour history to surpass $10 million in career earnings.

Norman was labeled the “Great White Shark” by a newspaper reporter during the 1981 Masters Tournament in reference to the shark inhabiting Australian waters as well as Norman’s size and blond locks. One of Norman’s phenomenal records is that he held the number one world ranking for 331 weeks.

After six seasons of European campaigning, he finished 1982 as the PGA European Tour’s top-rated player. In 1983 he won the Australian Masters, Hong Kong Open and World Match Play Championship, a year in which a knee cartilage operation kept him off the course for a time. In 1984 he had great wins in the Australian Masters, Victoria Open, Kemper Open, Canadian Open and Australian PGA, and was ranked ninth in the American Order of Merit placings.

Early in 1985 Norman won the new Australian Skins Game from Severiano Ballesteros, Jack Nicklaus and Tom Watson. After playing most of the year on the American circuit, he won the Australian PGA by eight shots from Sweden’s Magnus Persson, two weeks later he took the Australian Open title by two shots from Ossie Moore.

Norman established himself firmly in 1986 as the best golfer in the world. He is the most successful Australian professional ever to play the game. His success in 1986 was phenomenal. He won the British Open, the World Match Play title, the Dunhill Cup (a team event) and finished second in the USA Masters. He won six events in a row – a feat that at the time was second to Ben Hogan’s record of 11 consecutive victories achieved in 1945. However, he infamously lost a near-certain PGA Championship after Bob Tway holed a greenside bunker shot (though Norman himself shot a 76 that day). In 1987 he lost the Masters in a playoff on an even more miraculous 45-yard chip shot by Larry Mize on the second play-off hole.

Norman won the British Open again in 1993, and in 1994 won the Players Championship in record-setting fashion (averaging 68.81 per round for the year).

Despite his huge success on the US PGA TOUR and his many wins around the world, Norman will be forever regarded as an underachiever (given his talents), a characterisation fuelled by his myriad near-misses in the Masters, the US Open, and the PGA Championship. He was equally a victim of his own bad luck and good luck on the part of his fellow golfers in major championships. He is one of only two players to have competed in – and, like Craig Wood, to have lost – play-offs in all four major championships. Despite the losses, though, Norman still has twenty nine top-ten finishes in the majors.

After Nicklaus left his prime, Norman was regarded as probably the game’s greatest long hitter. In his heyday, driving long and incredibly straight off the tee with a persimmon (wood) clubhead, he intimidated most of his fellow professionals. However, with the advent of the “metal-wood” by Taylor Made and other subsequent advances in golf ball and golf club technology (especially the variable face depth driver), his dominance was significantly diminished, as the “new technology” enabled less precise ball-strikers than Norman to achieve equal (or even better) results in accuracy and distance.

While his well-documented wins on the golf course secured him a spot in the World Golf Hall of Fame in 2001, he continues to work at both his game and a business that promises to succeed long after his playing days are behind him.