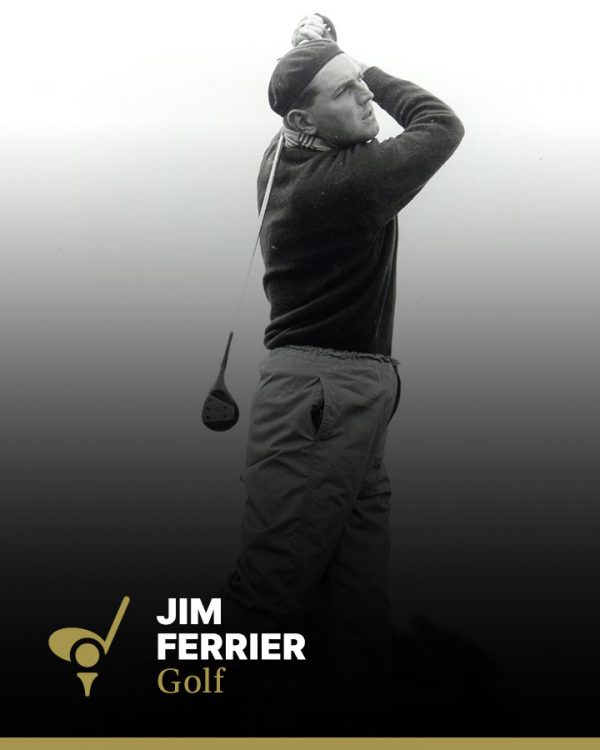 Big Jim’ Ferrier was a dominant player in Australia in the mid to late 1930s when still an amateur, and compiled what may well be the best all round amateur professional record of any Australian golfer.

Growing up just one booming drive away from the Manly Golf Club in Sydney, Ferrier was the first Australian golfer to make a serious impression on the rich and competitive American professional circuit.

A schoolboy champion, Ferrier established himself as one of Australia’s finest amateurs and made a name for himself by winning the Australian Amateur and Open Championships in successive years (1938 and 1939).

Before that, Ferrier had won the Manly Club Championships at the tender age of 15, and at 16 won the first of four New South Wales Amateur Championships (1931, 1934, 1937, and 1938). “Young Jim Ferrier was quite equal to the occasion and justified his entry into state golf.” That masterly understatement in the press masked the incredible achievement of a 16 year old beating veteran Eric Apperly for the 1931 title.

As a champion amateur, Ferrier was a ruthless opponent who invariable demolished his rivals and deserved the ‘Undertaker’ nickname bestowed by an admiring press corps.

Typical of his grim will to win by the widest possible margin was the time in 1935 when he shot a blistering 67, 65, 70, 64 at Sydney’s Killara course to win the NSW Close Championship by a record 16 shots. The following year he shot a final round of 62 to win the same event by a 10 under par margin at Manly.

After the Amateur Open double of 1938 and 1939, it was inevitable Ferrier would turn professional, but it came as a shock to his admirers when he forsook the then infant Australian pro circuit to settle in the US in 1940. While still an amateur, Ferrier won the Chicago Amateur and three American Opens as an amateur -St Paul, Milwaukee, and the Miami Opens.

Ferrier in fact turned professional ahead of his plans, he had entered the US Amateur Championship but was barred from competing over a technicality -a simple ‘handy hints’ book for novice players that he had written was deemed by American authorities to have contravened the amateur code and his entry was rejected.

Ferrier and his wife Norma took out US citizenship in 1944 and he served as a sergeant in the US Army in the Second World War. His first major success on the American pro circuit came in 1947 when he won the US PGA Championship. He was the first Australian to win a major. In 1950 – when he averaged 70.27 from 119 rounds -he was the second highest money earner on the US circuit behind Sam Snead.

Ferrier almost took out the 1950 US Masters, leading Jimmy Demaret by three shots with six holes to play but lapsed into an uncontrollable run of bogeys. During his US circuit career, Ferrier won a total of 18 circuit Opens and the Canadian Opens of 1950 and 1951. He amassed prize money earnings of $178,453.

After some 20 years on the trail and an eight year stint as club pro at the exclusive Lakeside Club in Los Angeles, Ferrier was still good enough to finish runner up to Jay Herbert in the 1960 PGA Championship.

He returned to Australia for the Citizen Watches Veteran’s Open in 1978 which, fittingly was held at the Manly Golf Club and, though Ferrier failed to win, he still showed the skills which made him a legend in Australia and the US.

Renowned as a great putter, Wilson manufactured a putter to commemorate Ferrier’s Major win, which is today a collector’s item.