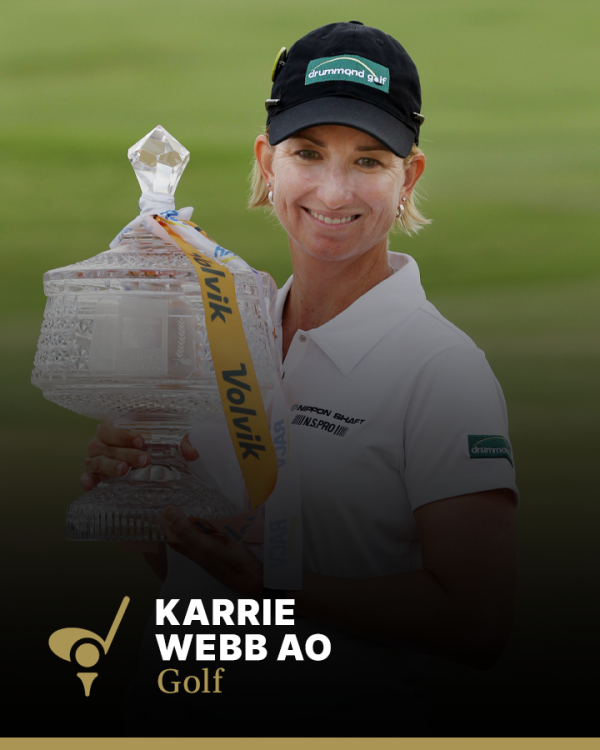 Karrie Webb AO was inducted into the Sport Australia Hall of Fame in 2022 as an Athlete Member for her contribution to the sport of golf.

Karrie Webb’s journey from a shy teenage golfing talent from the small far-north Queensland town of Ayr to the most dominant player on the world stage, is one of Australian sport’s greatest success stories.

Webb became one of the most decorated golfers of the modern era, winning seven career majors and 41 LPGA tour titles as well as 13 Australian, 15 European and 3 Japanese events at the time of her induction to the Sport Australia Hall of Fame in 2022. Additionally, Webb has most recently won her first Senior women’s major – the 2022 Women’s LPGA Championship defeating long term rival Annika Sorenstam by 4 shots in the process.

She was twice won the LPGA player of the year award, was a three-time LPGA Tour Money List winner and was the youngest person at the time – at 30 – inducted into the World Golf Hall of Fame in 2005.

Karrie Webb who grew up in Ayr, Queensland was seemingly always destined to make her mark in golf, with her parents and maternal grandparents playing the game and encouraging her early interest in the sport.

Starting with a few plastic clubs at the age of four before getting her first set on her eighth birthday, her passion for the game started from a young age. Not long before she turned 12, Webb boldly declared to her parents that she wanted to become a professional golfer, following a trip to Brisbane to watch Greg Norman win the 1986 Queensland Open.

Teaming up with coach Kelvin Haller early in her career, Webb went on to have a distinguished amateur career, representing the Australian team from 1992 to 1994, including winning the Australian Amateur Stroke Play Championship in 1994.

A glorious striker of the ball armed with a quiet determination and steely resolve, she turned professional in October 1994, a few months before her 20th birthday. In her second pro event, at the Australian Ladies’ Masters, she stamped herself as a future star when she finished second to Laura Davies, then considered to be the world’s best female golfer.

Less than a year after turning pro, Webb underpinned her potential by winning the 1995 Women’s British Open – before it became classified as one of golf’s majors – by six strokes. She was only 20, which at the time made her the youngest player to have won the Championship and went onto win European Rookie of the Year that season.

Webb’s resilience was on show at the end of 1995 when she qualified for the US LPGA Tour, despite nursing a hairline fracture of her right wrist. Her pain was only temporary, her subsequent success on the LPGA Tour would prove far more enduring and rewarding for the young shooting star.

Having finished runner-up at her first LPGA event in 1996, she scored her maiden win at her second start, winning a three-way sudden death playoff at the HealthSouth event at Orlando’s Disney World. The LPGA’s Rookie of the Year won four tournaments, including in Las Vegas, which made her the tour’s first player to win $US 1 million in a season.

A second British Open victory followed in 1997 – this time by eight strokes – as one of three victories that year. She won the first of eight Australian Ladies Masters in 1998 (including four in a row) and the first of five Women’s Australian Opens in 2000.

But it was Webb’s major title dominance from 1999 to 2002 – a period in which she won six of her seven majors – which set her apart from many of her contemporaries.

Her major success started with four birdies in the last five holes to win the 1999 du Maurier Classic. She won the Nabisco Championship in 2000; the US Women’s Open in 2000 and 2001; the US Women’s PGA Championship in 2001; and the Women’s British Open (her third success in the event) in 2002, the year after it was elevated to an LPGA major title. Her win in the newly elevated Women’s British open meant that she became the first player in LPGA history to achieve the “Super Slam” for winning all five Majors available in her career.

Her two LPGA Tour Player of the Year awards came in 1999 and 2000 at a time when she was widely acknowledged as the best female player in the world.

Her seventh major victory came in 2006 in the Nabisco Championship, representing a triumphant fightback from a form dip that saw her go through the previous year without a win. Her comeback was sealed by four LPGA victories in 2006.

Webb’s status was further elevated when she became the youngest person at the time – at age 30 – to be inducted into the World Golf Hall of Fame in 2005. She was the first Australian female golfer to receive that honour and only the third Australian golfer overall, following Greg Norman and Peter Thomson.

By 2022, when Webb was inducted in the Sport Australia Hall of Fame, she had won 41 LPGA Tour events, 13 tour events in Australia, 15 in Europe and three in Japan, as not only one of the most successful golfers of all-time, but also one of the most durable competitors. At the 2022 Women’s LPGA Championship, Webb won her first Senior women’s major defeating long term rival Annika Sorenstam by 4 shots in the process.

Webb’s legacy has long been assured, but the inspirational platform she helped to set for young Australian golfers of the next generation will live on for many years to come.