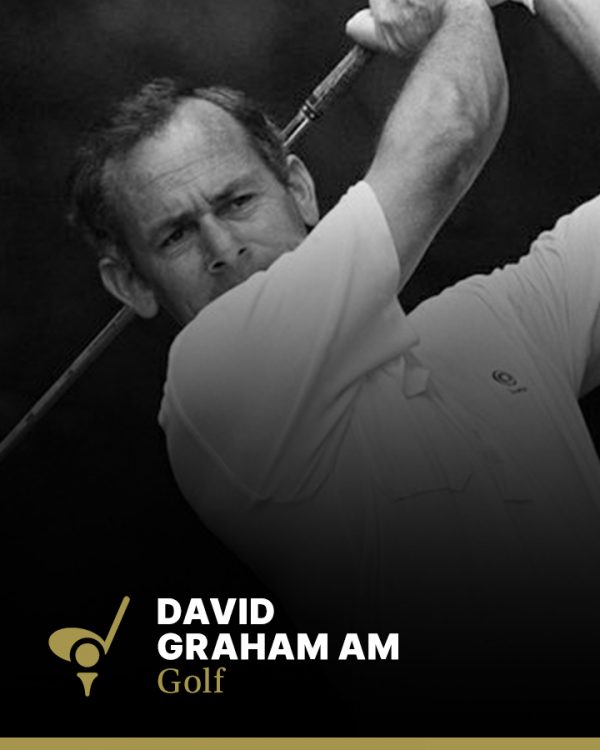 When Melbourne born David Graham won the United States PGA golf championship in August 1979, he became the first Australian to win a major international championship since Peter Thomson won the 1965 British Open. Graham also won the 1981 US Open Golf Championship in Pennsylvania, and finished third at the 1985 Open Championship after sharing the third-round lead. He also formed part of the Australian teams that won the World Cup (in 1970 with Bruce Devlin) and the Dunhill Nations Cup (in 1985 with Greg Norman and Graham Marsh and 1986 with Norman and Rodger Davis).

Graham turned professional in 1962 and after a successful spell on both the Australian and Asian tours he joined the US Tour in 1971 after failing to qualify for his US player’s card at his first attempt in 1970. That year saw him win some notable tournaments, including the French Open and the Thailand Open.

His first US Tour win came the following year when he beat fellow countryman Devlin in a play-off for the Cleveland Open. He enjoyed his finest tournament win yet when he captured the 1976 Piccadilly World Match Play with his magnificent putting in his victory over American Hale Irwin. Graham also won the American Express Westchester Classic and American Golf Classic in 1976.

1977 saw Graham win the Australian Open and the South African PGA Championship. Then in 1979, he enjoyed his greatest hour yet with his victory at the US PGA Championship. In a remarkable finale to the tournament, Graham shot a closing round 65 to go into a play-off with Ben Crenshaw who had finished with a 67. Those statistics do not tell the full story though as the Australian astonishingly took a double bogey six at the 18th when victory was all but his. Lesser men may have been broken by that failure but Graham showed his mettle by holing putts of 30 feet and ten feet at the first two extra holes to stay in contention and a birdie at the next secured his first major championship.

In 1996 he joined the Senior PGA Tour, later known as the Champions Tour. He recorded five wins, three in 1997, the GTE Classic, the Southwestern Bell Dominion, and the Comfort Classic. He also won the Royal Caribbean Classic in 1998, and the Raley’s Gold Rush Classic in 1999.

In addition to his great skills as a player, Graham has also been recognised as one of the finest golf-club designers in the world. In 1988 he was made a Member of the Order of Australia (AM) for his services to golf.