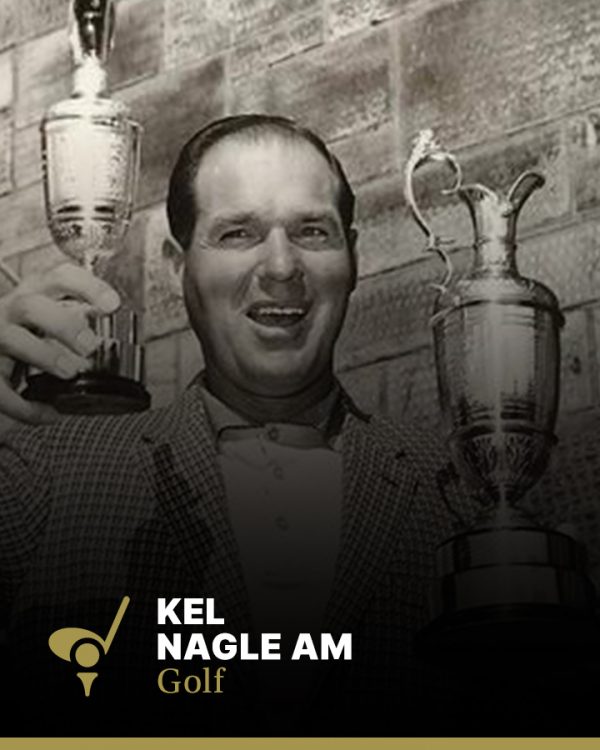 Kelvin ‘Kel’ Nagle enjoyed his first notable success some three years after he turned professional, when he captured the 1949 Australian PGA title, but it was to be many years before he would challenge for the game’s major honours.

His greatest moment was, without doubt, at the 1960 British Open – it’s centenary year – played at St Andrews. With the advice of his fellow countryman Peter Thomson to help him, Nagle held off the challenge of golf’s rising star Arnold Palmer, who was making his debut appearance. Such was Thomson’s faith in Nagle’s abilities that he took advantage of the generous starting odds of 35-1 and backed him to win the tournament. Nagle did not let him down and his rounds of 69, 67, 71 and 71 (total 278) were just sufficient to hold off the challenge of Palmer who closed with a 68. That 68 included a birdie at the last hole to put pressure on the Australian but Nagle held his nerve admirably to hole a 10 footer at the 17th and a par at the last handed him his first major title at 40 years of age. Nagle had never finished in the top ten at a major championship before.

The following two years saw Palmer make up for the disappointment of that 1960 defeat with victories at Birkdale and Troon with Nagle turning in highly creditable performances to finish fifth and second respectively. The Australian turned in yet another fine display at the 1963 British Open to finish in fourth place. His best result in a United States major was second in the 1965 US Open, tying with Gary Player, but was beaten in the play-off 71-74, a year after he won the Canadian Open.

In 1961, Nagle created an Australian record when he shot 260 in the Irish Hospitals Tournament – the lowest score in a 72 hole event. Nagle teamed with Thomson to finish second in the 1977/78 Legends of Golf tournament in the United States.

Nagle is now immortalised in an award which is presented annually to the best performing rookie in the Australian PGA Championship. The award is the Kel Nagel Plate and was first awarded in 2005.

In 1980 Nagle was awarded the Member of the Order of Australia (AM) for his service to golf.