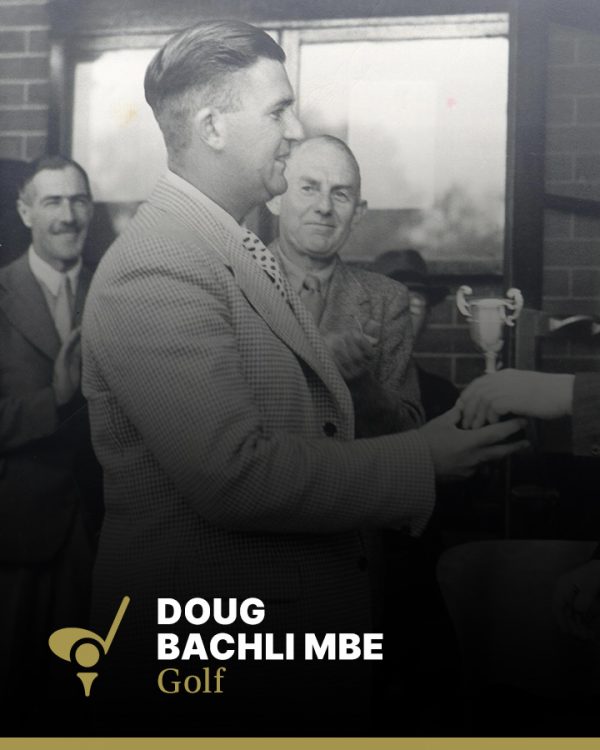 Doug Bachli, one of the foremost amateurs of his time, was the first Australian to win the British Amateur Championship. Carving an immortal niche for himself in 1954, Bachli defeated the red hot favourite, American “Big Bill” Campbell two-one in an historic encounter that focused the world spotlight on Australian golf in a way it had never been focused before.

Bachli trailed for most of the last day, but put his stamp on the championship when Campbell collapsed under the pressure of the final five holes. In a gallant display, Bachli turned the tables on the American, trailing by a hole at the 32nd, but won three in a row to switch his deficit into a two hole advantage. A half at the 35th gave him the crown.

Bachli holed a five-foot putt to win the 32nd hole where Campbell’s pitch to the flag was too long. At the next, greater tragedy hit the American when he drove his ball into a fairway trap. Striving for length he slammed his first recovery attempt into the face of the bunker, and altogether took three shots from the sand to get his ball back on the fairway. Now Bachli was one-up and the 34th, a “long, short hole” turned into another disaster for the American.

Campbell pulled his tee shot into the rough and, while the crowd watched in amazement, duffed his pitch shot a few feet and conceded the hole when he missed the green with his next leaving Bachli two-up and two to play. With a huge turnaround in the fortunes of the match and an Australian victory in sight, both men were almost at equal distances from the hole, facing four-foot putts for pars at the long 35th.

As Bachli stood over the ball, he knew that if he holed it the match would be over. He did, and the victory not only changed the life of the amiable, popular, 32-year-old Victorian, but it was an historic win, one which just two months later was accorded even greater significance when fellow Melbournian Peter Thomson won the first of five British Open Championships. During his 1954 visit to Britain, Bachli thrived on keeping the ball in play to be unbeaten in 22 matches.

In his youth, Bachli was an outstanding schoolboy swimmer and Australian rules player before taking up golf. Within two years of beginning his game at Royal Canberra, he had a handicap of five and it was here that the great Bobby Locke saw Bachli win the Canberra Cup when he was just 14, declaring, “The lad is a golfing marvel”. Upon moving to Melbourne, Bachli joined the Victorian Golf Club in 1940, playing from scratch, and slotted into a pennant team that reigned supreme through the ‘40s. He was elected as a life member of the Club in 1957. His strength as a player came from a stocky build, on which he based an orthodox swing with tidy rhythm. His driving was infallible, and he capped this off with a flare for holing out.

Bachli has an impressive list of other team and individual amateur titles to his name including playing in the Australian team that won the inaugural Commonwealth teams event at St Andrews in 1954 and the 1959 Commonwealth matches in South Africa.

Bachli visited Britain again in 1958 and played in the Australian amateur team of four that won the inaugural Eisenhower Cup Trophy, played appropriately at St Andrews. Bachli starred in that squad, which included Peter Toogood from Tasmania, Bob Stevens from South Australia, and Bruce Devlin from New South Wales. The win boosted Australia’s golf image immeasurably and in 1959, Bachli was made a member of the Royal and Ancient Golf Club at St Andrews. He also played in the Australian team to Japan, 1962. Among his other international honors are victories in the World Airlines Championship with his Ansett colleague Jock Balding in 1966 and 1971.

Working for his publican father, he had plenty of time for golf, which enabled him to compete in amateur championships around Australia. He was described by British papers as “the rotund inn-keeper from Down Under”.

Bachli’s national results are also notable. He employed a classic short game to win his first Australian title in 1948 by beating 18 year old Peter Thomson one up in the semi-final before thrashing Peter Heard seven and six in the final at Metropolitan. But perhaps Bachli’s finest round was when he completed the first nine holes at Royal Sydney in a record 29 (six under par) while playing Harry Berwick in the third round of the 1949 Australian title. As defending champion, his card for the first nine read: 3 3 3 3 4 2 4 3 4 (29), despite failing to better par at the easy first, and his chip for a birdie at the ninth hanging on the lip of the hole. This record remains intact. He ended up losing his title but won again at Kooyonga in 1962 when he whipped John Hood seven and six in the final.

A remarkable golfer whose smooth swing belonged to the era of Sam Snead and Gene Sarazen, Bachli was a dedicated amateur and never regretted not turning pro. He later founded the Golf Society of Australia, which in turn helped to breathe life into the Australian Golf Museum.

In 1998 Bachli was devastated when the putter he used in the 1954 British Amateur was among clubs stolen from his home. It was returned, following newspaper reports, and rested upon his casket at his funeral in 2000. The Doug Bachli Trophy is awarded in his memory each year to the player that accrues the highest total of points for stroke performances in designated senior events throughout the year.

He was made a Member of the Order of the British Empire (MBE) in 1996 for his services to golf. He led a very colourful life.