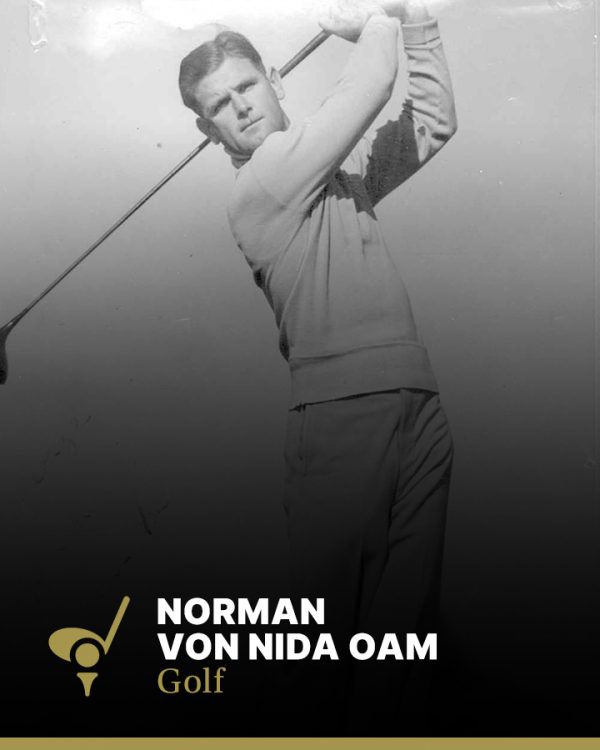 Norman Von Nida was rated the greatest Australian golfer of his time, and at his peak was among the top half dozen players in the world. He paved the way for Australian golfers abroad, and it was largely his example that inspired players like Gary Player, Peter Thomson, Bruce Crampton, and Bruce Devlin to test their skills internationally.

Von Nida slaved to help develop the local professional circuit and to assist promising young players. Credited with some of the most fiery outbursts ever seen on Australian and English courses, Von Nida made headlines for most of his playing career for scathing verbal assaults on noisy spectators, dithering officials, and journalists who meddled with the facts.

At the age of 18 Von Nida won the 1932 Queensland amateur championship and then turned professional. Von Nida then won the Queensland Open in 1935, 1936, and 1937, and in that year won the ACT Open and moved permanently to Sydney. Even in those formative years Von Nida determined he would chase the big money overseas and in 1938 began his international career by travelling to Manila and winning the Philippines Open. He repeated the win in 1939, took out his first New South Wales Open and picked up another ACT Open, followed with another Queensland Open in 1949, and then, like all other top golfers, was sidelined during the Second World War.

After the war, Von Nida exploded back on to the golfing scene, winning the 1946, 1947, and 1948 NSW Opens and making his first trip to England in 1946, the year in which he also won the first of four Australian PGA titles. Von Nida shook the establishment when he blasted around England winning the News Chronicle and Brand Lochryn Opens, and finishing a solid third in the British Open.

1947 was a triumphant year for Von Nida. He won the NSW Open at home and in England took out seven tournaments – the Dunlop Southport, Star, Lotus, Spalding, Penfold (tied), and Dunlop Masters (tied) and took out the Vardon Trophy (for the lowest scoring average on the British circuit – 71.25 for 52 rounds). His earnings for the English season (£3263) set a new British record. He was the first Australian to head the money list, and the first to win the Vardon trophy.

1948 was another triumph with wins in the Australian PGA and NSW championships and four more tournament victories in England (Lotus, Dunlop Masters, Daily Mail, and Spalding). While in England he shot a record 63 at Sunningdale, when he won the Dunlop Masters.

Von Nida won more than 100 tournaments. When his playing days were over, he taught extensively in America and for 14 years helped prepare Italian national golf teams.

In 1985 Norman was awarded the Medal of the Order of Australia for his services to golf.