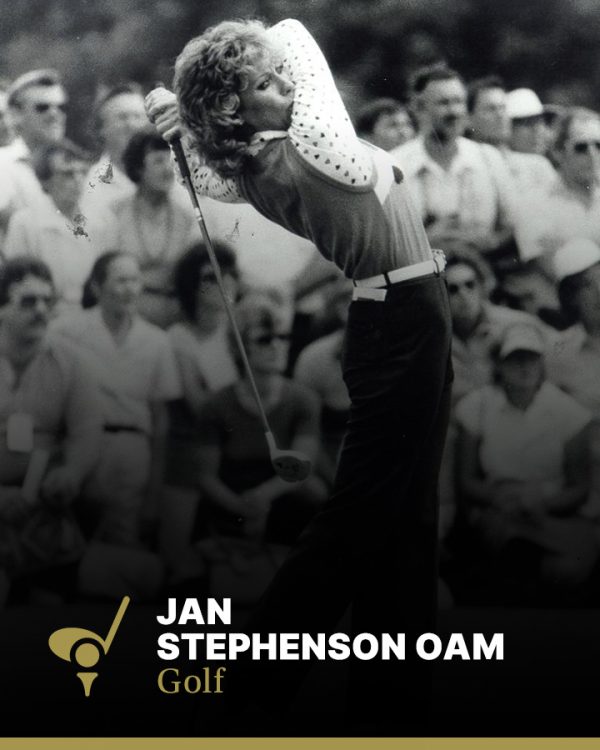 Jan Lynn Stephenson OAM was inducted into the Sport Australia Hall of Fame in 1985 as an Athlete Member for her contribution to the sport of golf.

Stephenson began playing golf at the age of ten, and has been turning heads and winning tournaments ever since. With a vivacious personality and blonde, blue-eyed good looks accompanied by her exceptional golfing ability, Stephenson was a gallery favourite from early in her career.

Born in Sydney, Stephenson won five consecutive New South Wales Schoolgirl Championships in Australia while a teenager, followed by three straight wins in the NSW Junior Championships. She turned professional in 1973, and won the Australian Open that year. Stephenson joined the LPGA Tour in 1974, and was named Rookie of the Year.

Stephenson’s first LPGA victory was the 1976 Sarah Coventry Naples Classic. Her most successful period was the early 1980s, when she won all of her majors in consecutive years. Her victories included the 1981 du Maurier, the 1982 LPGA Championship and the 1983 US Women’s Open. In July 1981, Stephenson set an LPGA all-time 54 hole record score of 198, 18 under par. In July 1983, she joined an elite group of only five players by winning three of the four Major Championships – the Canadian Open, the LPGA Championship, and the US Open.

In March 1985, Stephenson reached another milestone when her official LPGA earnings reached US $1 million. She was the first Australian professional female golfer to achieve this. Stephenson continued playing LPGA events into the 1990s, but was hampered by an injury incurred during a mugging in Miami in 1990.

Stephenson was the Honorary Chairman of the National Multiple Sclerosis Society (TriCities of Texas Chapter) and was active with many other charities, as well as retaining an ongoing interest in golf, both at playing and coaching levels.

Inspiration: “Believe in Yourself”