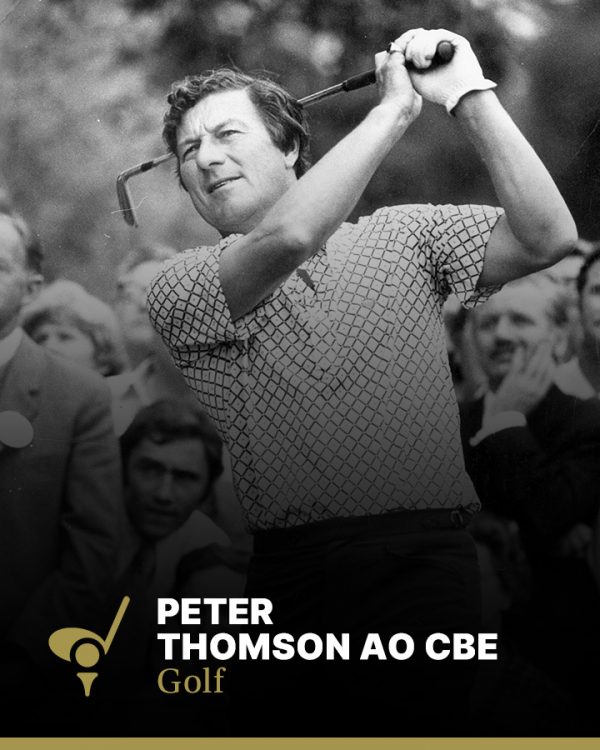 Peter Thomson was inducted into the Sport Australia Hall of Fame in 1985 as an Athlete Member and was elevated to Legend of Australian Sport in 2001 for his contribution to the sport of golf.

Thomson was the thinking man’s golfer. His clean, brisk game was based on cold logic and a gift for reducing things to their simplest essentials. His style was free of the extraneous, so that the path he would take to victory seemed a remarkably straight line. Thomson seemed pressure-proof. His grip was light, his manner brisk and his motion through the ball graceful and devoid of much physical effort. He was a reliable and occasionally brilliant putter. “There were no frills,” said Norman von Nida, “so virtually nothing could go wrong.” Thomson was a five-time winner of the Open Championship with four wins and three runner ups between 1952 to 1958 before adding another title in 1965.

Growing up in Brunswick, Melbourne, Thomson’s first experiences of golf were brief interludes on the Royal Park course, sneaking on for a quick few holes. With the second world war impacting the globe he was largely free to develop his own instinct due to the absence of skilled golfers. His natural talent was soon spotted, official membership arranged, and the way cleared for him to become club champion just after his 16th birthday. Three years later he won the Victorian Amateur Championship but the following year, in 1949, Thomson gave up his industrial chemist role at Spalding where he helped design and make golf balls to become a professional golfer.

Thomson won his first professional tournaments quickly, including his first of nine New Zealand Opens in 1950. He competed in three of the four Major championships making his first appearance at the Open Championship in 1951 with a tie for sixth place. Thomson followed up his debut Open appearance by finishing in second place in 1951 and beginning a seven-year run in which he finished as runner up or better.

In 1953 Thomson made his move to the American Majors finishing tied for thirty sixth place at the Masters Tournament, and then tied for twenty sixth place at the US Open. He then competed in the Open Championship; finishing tied for second place. Thomson found he was best on fast-running courses where judging the bounce and run of the ball was more important than long hitting. It was mostly for that reason that he did not excel when playing on the well-watered and longer courses in the United States

Thomson made a second attempt on the American courses in 1954 but finished tied for sixteenth at the Masters and missing the halfway cut at the US Open. Following the US trips Thomson attended his fourth Open Championship with a one stroke lead he secured his first Open Championship title. Thomson paired up with Kel Nagle to represent Australia where they took home what was then known as the Canada Cup, now called the World Cup, winning by four strokes.

Thomson’s year in 1955 saw him compete in the Masters and finish tied for eighteenth before skipping the US Open. At the Open Championship he defended his title with a two-stroke lead. He entered the 1956 season of golf skipping the Masters and going to the US Open in which he achieved his best result finishing tied for fourth place. Thomson won his third Open Championship in a row the first person to do so since 1882 and the first from the twentieth century.

1957 saw Thomson make another attempt at both the Masters Tournament and the US Open, achieving his best result at the Masters with a fifth place and tied for twenty second place at the US Open. Thomson finished runner up to Bobby Locke finishing three strokes behind, however a subsequent whisper campaign about Locke’s victory begun as he failed to replace the ball in the right spot on the green which carries a disqualification penalty, the rumour saw the friendship between the close rivals destroyed. Locke believed Thomson to be responsible even after he had supported the authorities ruling that Locke gained no clear advantage.

Thomson in 1958 attended the Masters Tournament in a performance in which he tied for twenty third place before going to his eighth Open Championship which he won in a playoff against Welshman Dave Thomas to claim his fourth title. He had a poor year in 1959 being disqualified at the Masters Tournament and tying for twenty third at the Open Championship his worst result in nine years. Nagle and Thomson won their second World Cup winning by 10 strokes ahead of the American team.

Between 1960 until 1964 Thomson competed in the Open Championship every year and only finished outside the top ten once in 1964. His tournaments at the US majors dwindled competing in the Masters Tournament for the second last time finishing tied for nineteenth place and missing the cut for the US Open, his last appearance in the tournament.

His final British Open title came in 1965, and it was considered his most important since during the ’50s, only a handful of America’s best players travelled to play the Open. By 1965, all the world’s best were there, and Thomson held off Arnold Palmer, Jack Nicklaus, Gary Player and defending champ Tony Lema for the victory. His fifth Open Championship put him esteemed company as just the third golfer to win the title five times or more. Thomson made fifteen more appearances at the Open Championship between 1966 and 1984 before switching over to the PGA Seniors Championship.

Thomson’s tournament wins included twenty-six in Europe, nineteen in Australia and New Zealand and eleven in Asia and Japan. He played only a few seasons in America, resulting in one victory in the US, the 1956 Texas Open, where he closed with a 63 and defeated Cary Middlecoff and Gene Littler in a playoff.

Thomson was the non-playing captain of the international team at the 1996 and 2000 President’s Cup played at the Robert Trent Jones course. This was also the successful team that defeated the USA in the 1998 Presidents Cup at Royal Melbourne.

He later worked as the president of the Australian PGA for 32 Years. During this time, he not only promoted Australian golfing but also helped set up the Asian Tour. Inducted into the Australian Golf Hall of Fame; his influence on Australian and International Golf is immeasurable.

As a designer he has worked on golf course projects all around the world, focusing on Japan, South East Asia and Europe. Most notably the Open Course at Moonah Links, Victoria Australia.

What was dubbed by Peter as his ‘Leviathan’ was Australia’s first purpose-built championship course. It was set up specifically to host the ‘Australian Open’ National Championships along with several other Australian Golf Union Championships.

With a natural amphitheatre setting for the crowds to view championship golf and to give the public a chance to walk the fairways of a championship layout, it is a perfect holder for major tournaments.

The 18 holes are set out as a links inspired course that was set up by Peter with the aims of creating a ‘classic course’ that would also be a fantastic championship test of golf.

Its holes follow the terrain with minimal shifting of land. It is one of the more challenging courses Peter created with and he stated that it was ‘extremely tough, but it has flexibility’.

Peter developed the course in a similar fashion to that of St Andrews; smaller bunkers are set as ‘minefields to be avoided’ throughout the course causing the golfer to be considered in their approach to the hole and unable to just play driver straight down every fairway without caution.
** Credit Moonah Links