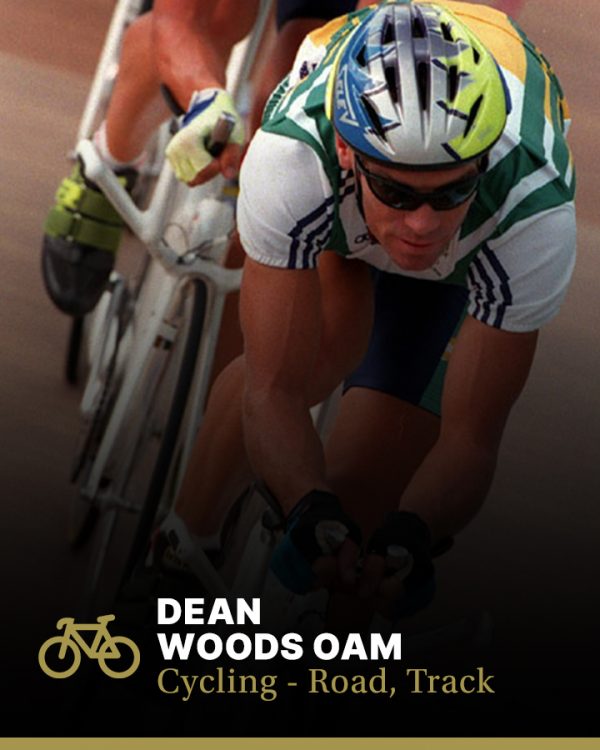 Dean Woods OAM was inducted into the Sport Australia Hall of Fame in 2000 as an Athlete Member for his contribution to the sport of cycling.

Dean Woods was one of Australia’s most successful cyclists of the modern era. During his career he set one world record and four national records, and won 20 national titles and 15 state championships. He was three-time world cycling champion and had won one gold, one silver and two bronze at three Olympic Games.

In 1983 Dean was the national individual pursuit champion. He also won the individual pursuit at the Junior World Championships in New Zealand, and defended this in 1984 in France. That same year, Dean was selected in the 1984 Los Angeles Olympic Games team.

Woods, just 18 at the time, finished 0.05 seconds away from a bronze medal in the individual pursuit. He rode on a bike which had been discarded as out-of-date by another Australian cyclist, Gary West, further emphasising Woods talent.

In the 4000m team pursuit, the Australians were third fastest in the qualifying round, then beat the fastest qualifier, Italy, in the semi-final. In the final, against the United States, they had a break when the American rider Dave Grylls amazingly missed his pedal at the start, and dropped out. Only three need to finish in the team pursuit, and the Americans rode with just three for the entire course. Michael Turter and Woods set up the victory in the two blistering leading laps, and Kevin Nicholls and Michael Grenda were able to finish the job.

At the 1988 Seoul Olympic Games, Dean won silver in the 4000m individual pursuit, to the USSR’s Gintautas Umaras. Woods sprinted to an early lead, but Umaras caught him at the half way mark and went on to win. Dean also took bronze in the team pursuit.

In 1992, he won the national individual and team pursuit championships. Overseas, he finished eighth in the Coca Cola Trophy in Germany and ninth in the Super Week, USA.

In 1993, Dean won ten races on the Australian circuit including the national individual and team pursuits. He won the Melbourne to Warrnambool Road Race again, and finished 12th in the Herald Sun Tour. Overseas he finished fifth in the Super Week, USA.

At the 1994 Commonwealth Games in Canada, Dean was again part of the winning team pursuit. He also won bronze in the point race. That same year he won the national individual pursuit championship in a new national record. He also won four Criterium races in Germany and the 6-Day of Grenoble in France. He finished third in the World Championships team pursuit in Italy.

In 1995 he was a part of the winning pursuit team at the World Championships in Columbia, and won three Criterium races in Germany. He came second in the national individual pursuit championship. A year later at the 1996 Atlanta Olympics, Dean won bronze in the team pursuit.