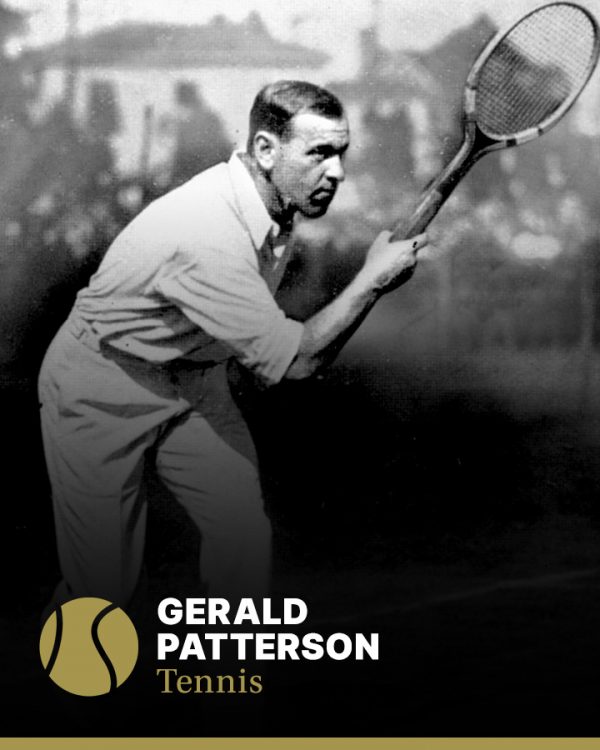 Gerald Leighton Patterson followed Norman Brookes as Australia’s second international tennis star. He was generally regarded as the first Australian to adopt a ‘power’ game. He was years ahead of his time with his cannonball service and net storming volley games, in an era when baseline stroke play was still very much in vogue.

A heroic Military Cross winner with the British army in World War I, he played the game with daring, too, charging the net behind an explosive serve, both flat and twisting. His exemplary smash, stiff volleying and good forehand rewarded him with numerous championships.

When international competition resumed after the war, he was the dominating player winning the Wimbledon singles championship in 1919 from Australia’s Sir Norman Brookes, becoming Wimbledon’s first post World War I champion. Patterson was runner up in 1920 to Bill Tilden, and won the title again in 1922 defeating Randolph Lycett 6-3 6-4 6-2. 1922 was the first year at the current venue and he became the first man to win the championship by playing through when the challenge round was abolished. The world’s most famous singer was in the debuting centre court. That was Dame Nellie Melba, the great Australian diva, Patterson’s aunt and number one fan. He also won the mixed doubles with Suzanne Lenglen in 1920 and reached the doubles finals in 1922 and 1926.

He did not play the French championships, as foreign players were prohibited from entering until 1925, when the famous ‘Musketeers’ ruled supreme.

Patterson played Davis Cup from 1919 through to 1928, winning 21 out of 31 singles and 11 out of 15 doubles matches, including the victorious 1919 Challenge Round in Sydney, the last time Australasia was victorious. Australia spit with New Zealand in 1923 and Patterson captained the first Australian team that reached the Challenge Round in 1923 and again in 1924, only to lose on both occasions to the US team. In 1946 he was appointed non-playing captain of the Davis Cup team.

Patterson was known as the ‘human catapult’ at home for his brutal serve, and there were tales that some of his aces were so forceful they bounded into the grandstand. He was among the world top ten six times between 1919 and 1925, number one in 1919.

He was inducted into the International Tennis Hall of Fame in 1989.