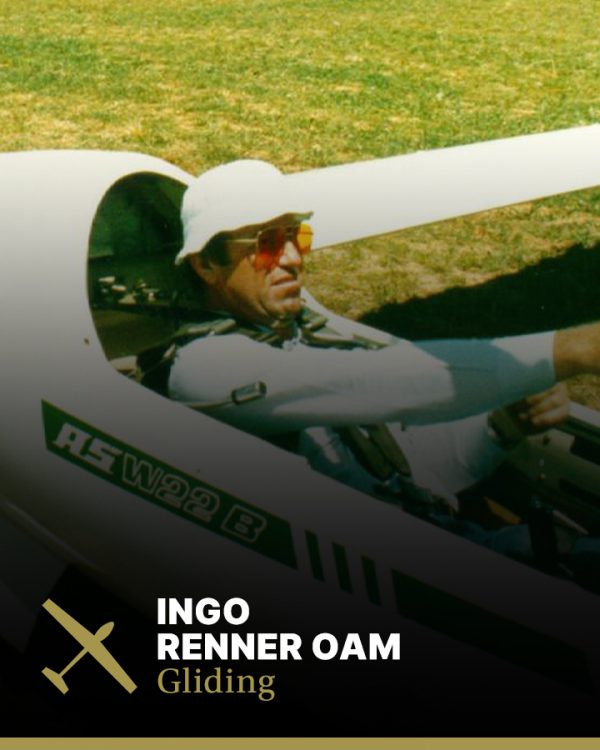 Ingo Renner OAM was inducted into the Sport Australia Hall of Fame in 1987 as an Athlete Member for his contribution to the sport of gliding.

Renner is considered the premier glider pilot in Australia of his time, earning 19 national gliding championships, several international championships and multiple records including the two-seater world distance record and single-seat speed record over a 10-km triangle.

The impact his career and personality had on the Australian gliding community cannot be understated.

Renner was a war baby, born in Bremen, Germany, in June 1940. His passion for soaring developed from watching models gliders in action and he soon learnt to build his own. He began gliding lessons at age 15 and after qualifying his club nominated him as an instructor.

A ship-builder by trade, Renner set out for Australia and found work at a shipyard in Brisbane. Determined to keep flying, he pitched up at the Darling Downs Soaring Club at Jondaryan. Within a week he was granted a full instructor rating. Characteristically, Renner owned his own Schneider Kingfisher before he owned a car!

In 1970 he moved to Tocumwal and began work at the newly established Sportavia Soaring Centre. He was there for the next 36 years, splitting his time between instructing in Australia during the summer months at the Oerlinghausen Gliding School in Germany for the northern summers.

Renner logged around 1000 hours each year and in 1971 became an Australian citizen and represented Australia at several world gliding championship events, winning first in the Standard Class in Finland, in 1976.

Renner won several more times on the world stage, including three consecutive wins in the Open Class in the USA in 1983, Italy in 1985 and Benalla, Victoria in 1987.

His trophy cabinet swelled with wins at several meetings around the world and the record books also carried the name Ingo Renner for many years. In 1975 he set a two-seater world distance record and in 1982 a single-seat speed record over a 10-km triangle, when he averaged 195.3 kmh. That effort saw his name added to the Guinness Book of World Records.

He has held many Australian gliding records. He has also coached the Australian Team for world competitions, helped the Japanese organise and run their very first international gliding contest on Hokkaido and coached many pilots for international competitions both here and overseas.

Renner finished his career with 36,000 hours of flying, of which about 31,000 was instructing and coaching.