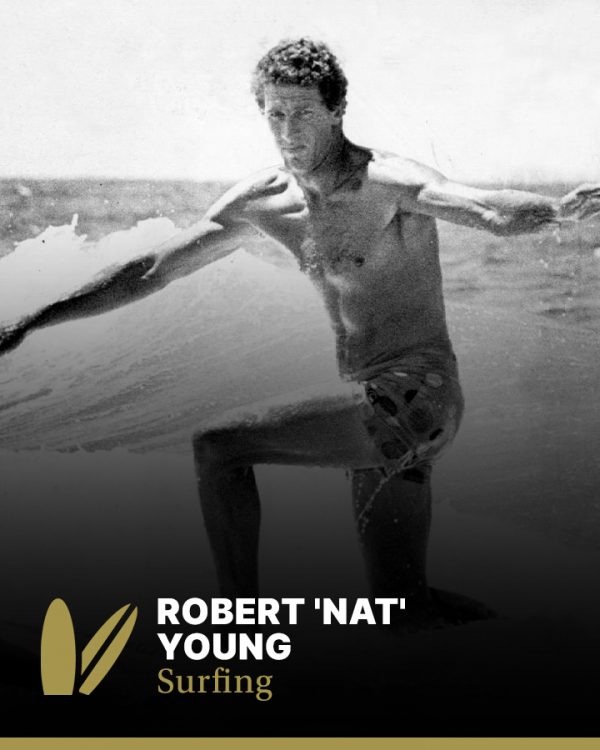 Robert ‘Nat’ Young was inducted into the Sport Australia Hall of Fame in 1987 as an Athlete Member for his contribution to the sport of surfing.

As a young boy ‘Nat’ Young reminded a fellow surfer of a “gnat sitting on the stern of the Queen Mary”. Years of usage have shortened the gnat to ‘Nat’ and transformed the outspoken critic of the surfing circuit into one of the world’s favourite surfers.

Young, while still a junior in 1963, won the Australian Open Surfing Championships at Bondi Beach. The first prize was a round-the-world first class air ticket, it took him six months to explore Hawaii and California before returning home. During this period he wrote a weekly surfing column for a Sydney newspaper and wrote for numerous surfing magazines around the world.

When he won the World Championship at Ocean Beach, San Diego, in 1966, Young was the first world champion who was not a native of the host country and became the first professional Australian surfer.

From 1964 until 1966, Young was the Australian Open champion and won the Smirnoff World Pro Championships in 1970 in Hawaii.

Young pioneered a whole new technique of surfing. He replaced the conventional and accepted smooth, fluid, and flowing style with a more high speed aggressive surfing technique featuring rapid-fire changes of direction and flashy arcs and he became known as ‘The Animal’. He developed the astounding surfboard manoeuvre called the ‘Sturn’. Rocking down the face of a wave, he would make a sharp right turn and shoot back up to the top almost over its own wake: then with a weight shift he would reverse and scream back down again.

Young has contributed much to the sport of surfing through research and education. He wrote a program for his local government to teach kids to surf. In 1976 this manuscript became his first book called “Nat Young’s Book of Surfing”. By this time Nat had already discovered skiing and hang gliding and was fascinated with the similarity between these three sports. In 1977 he finished writing his first movie on this subject. The highly successful “Fall-Line” about the similarity in feeling between Hang Gliding, Skiing, Skateboarding and Surfing was completed in 1978 and was shown on TV channels all over the world.

“The History of Surfing”, a mammoth task involving two years of research and writing, was finally published in 1983. “Surfing Fundamentals” was first published in 1985 and that same year his second movie “The History of Australian Surfing” opened in Australia. At this time, long-boarding became popular again and he started to compete again with the emergence of a World Professional Tour in 1986, becoming world champion that year.

In 1987 he let the world title slip due to modelling commitments for Ralph Lauren in New York but in 1988 he regained the title and continued to hold it until he retired in 1991.

In early 2000 Nat was assaulted by a fellow surfer at Angourie and suffered serious facial injuries. While recovering from the resulting reconstructive surgery he spent his time compiling a book on the extent of “Surf Rage” around the world and what surfers could do to avoid it.

1986: Inducted into the Australian Surfing Hall of Fame