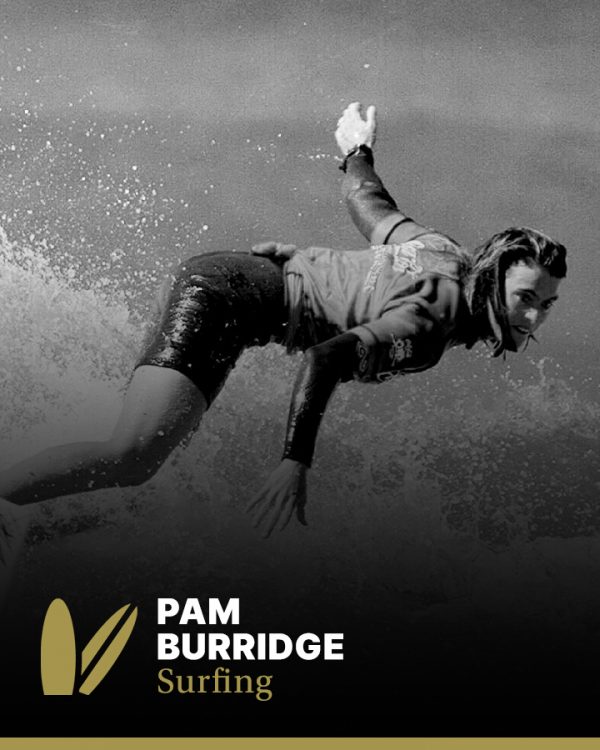 Pam Burridge was inducted into the Sport Australia Hall of Fame in 1995 as an Athlete Member for her contribution to the sport of surfing.

Burridge’s name still sits comfortably among the greats of Australian women’s surfing from the past 40 years. Her near 20-year professional career began in 1980 and continued through until she officially retired in 1999.

Skateboarding and other tomboyish activities guided Burridge into her desire for surfboard riding. At the age of 10 she was given her first, very much homemade, surfboard, and was surfing at Manly Beach, a short drive from the family home. A good history of surf swimming and ocean knowledge provided a base for quick progression. A summer stint at the Northern Beaches run Surf School with instructors like Nat Young, Bill McCausland and Tony Hardwick added to the learning and calmed the fears of Burridge’s non surfing parents.

At the time skilled Australian surfing girls were in short supply; the young Burridge, with her elegant natural style, stood out dramatically from the pack. Promotion-minded surf photographer McCausland picked up Burridge and ran with her into the media.

In 1977 Burridge entered her first surfing competition – the local Manly Pacific Boardrider’s winter point score event. Although nervous and completely bereft of any knowledge of the rules of competition, Burridge came away with the winners cheque, which turned out to be a rather large sloppy joe and plastic trophy.

A thirst for regular competition was satisfied in the many junior events of the day. Sometimes competing against other girls but often against the boys. This helped her to keep improving and gain some tactical knowledge.

The usual amateur contests were pursued and victories followed in both New South Wales state titles in 1979, 1980, 1981, and national titles in 1980 and 1981. By 1980, she was ranked 11th in the world and seemingly destined to join male counterparts Mark Richards and Tom Carroll in pro surf heaven.

An all too quick transition to the professional ranks followed, when the ruling amateur body declared that anyone who had surfed in a professional event would be ruled professional. As a national Australian champion Burridge had been invited to the elite Hawaiian North Shore events the previous winter and so therefore was deemed professional at age 15. At 16, she made the then International Professional Surfing top five.

So, on to the IPS circuit she went and by the age of 17 had her first, of what would end up to six times, runner up finish. A strong field of female surfers filled the top spots when Burridge started her professional career. Lynne Boyer and Margo Oberg ruled with their big wave acts winning over at the title deciding events at Sunset and Haleiwa. In 1981, at the Arena Women’s Surfsports Championships in Southern California, she finished second to Debbie Beacham. In the mid to late 80s it was a new crop of young girls that would be taking events and world titles. First Kim Mearig won with a speedy small wave act followed by Freida Zamba’s rule of world titles that could only be interrupted by a fiery South African, Wendy Botha, both of whom won four world titles.

In 1987, she met, and later began a relationship with, top-flight Australian shaper/surfer Mark Rabbidge. Soon after, she blitzed to a gloriously overdue world title in 1990 by what was then a record margin. Coming out of a mid season slump in 1990 Pam was nearly drowned in a wild set of waves at the October Drug Offensive Masters at Margaret River in Western Australia. She recovered to settle for a series of second places but finally broke through and won the women’s world title by 1914 points. She clinched the title at Sunset Beach when her only contender Wendy Botha bowed out in the semi-finals.

Feeling that she may have peaked, and with the tour still not a paying proposition, she retired at the end of 1993 — just in time for Lisa Andersen to step into the ring and help spawn the subsequent boom in girls’ surfing.

Burridge made a comeback in 1996. The new World Championship Tour structure tempted Burridge back to full time competition, qualifying for the elite top 11 as a trialist from round one in most events. A winning streak early that season saw Burridge take the ratings lead but she resisted the urge to chase another title and only surfed enough events to maintain a place on the following years tour.

As a WCT surfer she finished the year in 3rd position behind the guns of the new crop, Andersen and Layne Beachley. This result, although not so remarkable in the record books would turn out to be one of the most satisfying for Burridge as it showed she could compete and often win against the much heralded new talent in women’s surfing.

In 1998 she quit the tour ranked eighth in the world before years end when she fell pregnant with her first child. TV hosting, surf reports, painting surfboards and promoting Feisty Girl surfboards keep Burridge busy as well as her new life as mum.