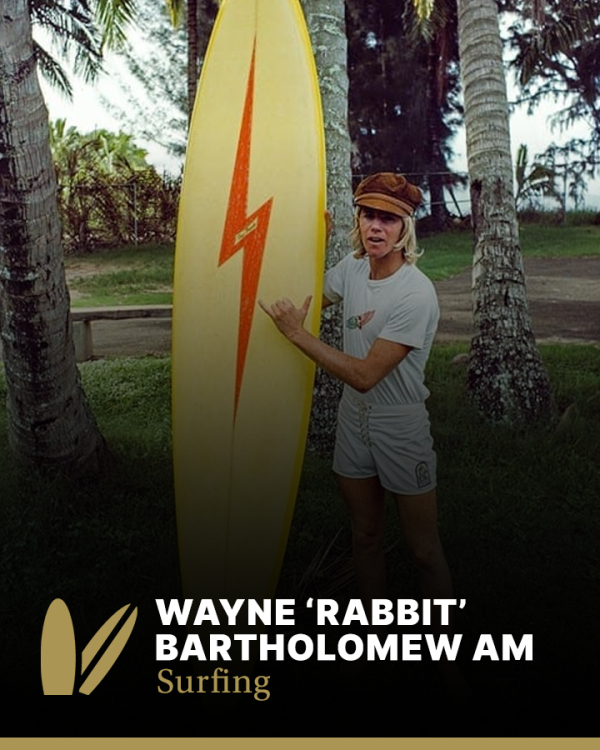 Wayne ‘Rabbit’ Bartholomew AM was inducted into the Sport Australia Hall of Fame in 1999 as an Athlete Member for his contribution to the sport of surfing.

Born and bred on the Gold Coast, Bartholomew was instrumental in pioneering surfing, helping establish the world tour in the mid 1970s. Renowned as a master of the tube and with an almost cavalier approach to big waves, Bartholomew took out the 1978 world professional title. He was rated in the top five in the world for eight consecutive seasons from 1977 to 1983 and remains revered as one of surfing’s fiercest competitors and greatest strategists – as well as one of its most flamboyant characters.

Bartholomew began surfing at Snapper Rocks, but the story starts when he moved to Kirra at age 13. He became synonymous with Kirra, and some argue that, thanks to his formative years at the famed Gold Coast point break, no one in the world has logged more tube time than he has. By the early ’70s, he was cleaning house on the Australian circuit, clashing with hometown rivals Peter Townend and Michael Peterson. He was nicknamed ‘Rabbit’ because he was a speedster on the soccer field — in the penniless days when he had to scrounge for food.

After turning pro in 1972, Bartholomew burst onto the international scene in the winter of 1975 in Hawaii when the status quo was rocked by the surfing of Shaun Tomson, Mark Richards, Ian Cairns, Townend, Bartholomew and a few others. Hawaii was no longer the exclusive domain of locals; the crew had, in Bartholomew’s words, “busted down the door.” Tube riding was taken to new levels and was documented by Bill Delaney’s ‘Free Ride’ — shot mainly from that season.

Professional surfing was still a dream in those days, but Bartholomew had the vision and the personality to sell it. His tactics, confidence and flair made him a top-rate competitor for professionalism’s first decade. He was crowned world champion in 1978, remained in the top five for seven consecutive years and came within a whisker of regaining the title in 1983. His image was David Bowie meets Muhammad Ali — pure rock-and-roll. Bartholomew was consummately professional, but he never let it get in the way of having fun.

Not knowing how to exit pro surfing with the grace that gave him one of history’s most stylish kick-outs, he slid down the ratings until 1986, then spent a few years in limbo. By the mid ’90s, he had become surfing’s global ambassador after running a series of classic events at Kirra and fighting to save our world’s oceans. He has served as mentor for countless surfers, including Gary Elkerton, Chappy Jennings, Sunny Garcia and his own adopted son, 1998 world junior champ Dean Morrison.

He established the Wayne ‘Rabbit’ Bartholomew Surfing Academy and with good friends Peter and Lorraine Bryant set up the Rabbit Circuit, a mini tour which helped fill the void following the collapse of the Australian Professional Surfing Association Pro-Am series. The circuit became a forerunner to today’s Australian Championship Circuit, a stepping stone to the world tour for the surfing champs of the future.

In 1993, Bartholomew became national coaching director for Surfing Australia. With the title came the responsibility for the then brand new Australian Championship Circuit – liaising with the Association of Surfing Professionals (ASP) to establish an Australian leg of the world tour. In March 1999, Bartholomew was appointed to surfing’s ultimate post -President and Chief Executive Officer of the ASP – overseeing the multi-million dollar world tour. He negotiated the relocation of the ASP head office from California to Coolangatta, further reinforcing the Gold Coast’s reputation as a world surfing capital.

Bartholomew remains an avid surfer and in October 1999, proved he is as talented and competitive as ever by winning the ASP Quiksilver World Masters title in France, outclassing a handful of old rivals en route to victory, proving once again that as long as he is around, surfing will always have a style counselor. He retains a strong grassroots connection to the sport through his role as President of his beloved Snapper Rocks Surfriders, Australia’s most successful boardriding club.