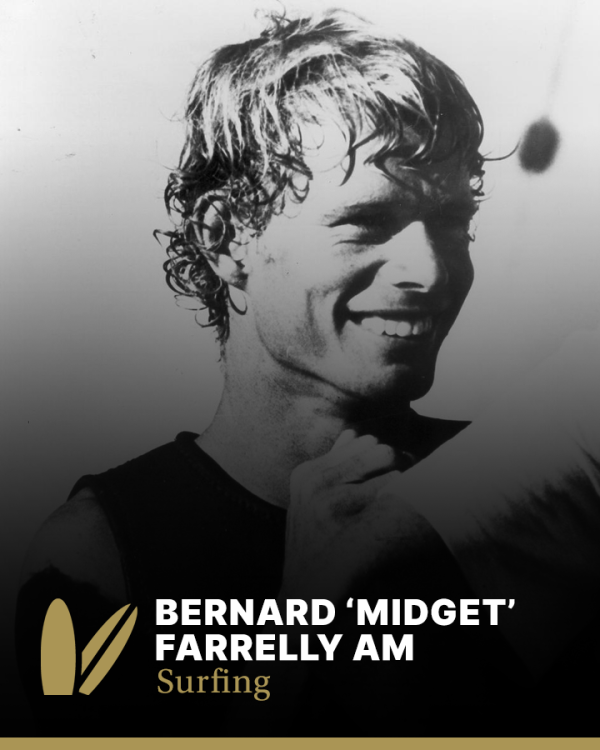 Bernard ‘Midget’ Farrelly AM was inducted into the Sport Australia Hall of Fame in 1985 as an Athlete Member for his contribution to the sport of surfing.

‘Midget’ Farrelly’s name became synonymous with board surfing throughout Australia when he won the very first official world championship at Manly in 1964.

Born in Sydney, Farrelly had his first surf experiences at North Bondi beach in the early ’50s. This was the heart of old-style Australian beach culture; the realm of the volunteer lifesaver “surf clubs”, where the country’s few surfers would leave their big wooden boards overnight because they were too heavy to carry home on cars or bikes.

Quickly nicknamed ‘Midget’ for his slight build among the big men of the beaches, a barely teenage Farrelly saw California’s Greg Noll surfing Sydney waves during Da Bull’s lifeguard-sponsored visit in 1956, and realised that you could ‘corner’ on waves. (The Americans gave many demonstrations at Melbourne beaches during that Olympic year and subsequently launched the surf boom.) By 1961, the Malibu-style lightweight boards were being churned out and Farrelly was the Australian surfing champion. In 1962, he went to Hawaii and won the Makaha International championship in 6-foot surf, using a quick, light-footed surfing style, surprising the Hawaiians and Americans by becoming the first ‘outsider’ to win the event.

By 1964 the International Surfing Federation had pulled together the world’s surfing nations to stage a first-ever World Surfing Championships. The venue was Manly Beach on Sydney’s north side. At the time, Australia was hardly the epicentre of surfing but 60,000 people lined the Manly shores to watch Farrelly take the men’s crown ahead of surfers such as Joey Cabell and Mike Doyle. Prior to the championship, Farrelly had won the Australian title. A sensational stylist, Farrelly was considered unbeatable at his peak in medium surfs but could match the world’s best in any conditions.

Farrelly was arguably the most successful competitor in the world during the 60s, he won the Australian title again in 1965, finished sixth at the 1966 world championships, and lost on a count-back to Fred Hemmings in the 1968 world championship at Puerto Rico to be placed 2nd. In 1966 he also won the Peruvian International Small Waves competition and in 1968 won the Bobby Brown Memorial.

Though always dedicated to the sport, he later became embroiled in a series of disagreements with Australian officials and was banned from entering the 1969 Australian title. He finished second at the 1970 world championships.

He set his own path through the ’70s and much of the ’80s, building a successful blank-making and chemicals business (Surfblanks), getting into alternative sports (he once broke his ankle hang gliding and is a highly skilled sailboarder), keeping a low personal profile, yet always being in the water on the bigger days at North Avalon and other breaks near his Palm Beach home. He learned to shape surfboards and produced two books – ‘A Surfing Life’ and ‘How to Surf ‘.

Midget still ran Surfblanks and spent more time in the water than ever before passing away on 8 August 2016. His public profile remained very low until, inspired by some of the new generation of Australian pro surfers, he began appearing at events and surfing in the legends displays that accompanied some Aussie pro events in the late ’80s. At the 1999 Noosa (Queensland) Surfing Festival, he re-won his 1964 crown in a replay of that event’s final heat.

2017: Posthumously made a Member of the Order of Australia (AM) for his contribution to surfing