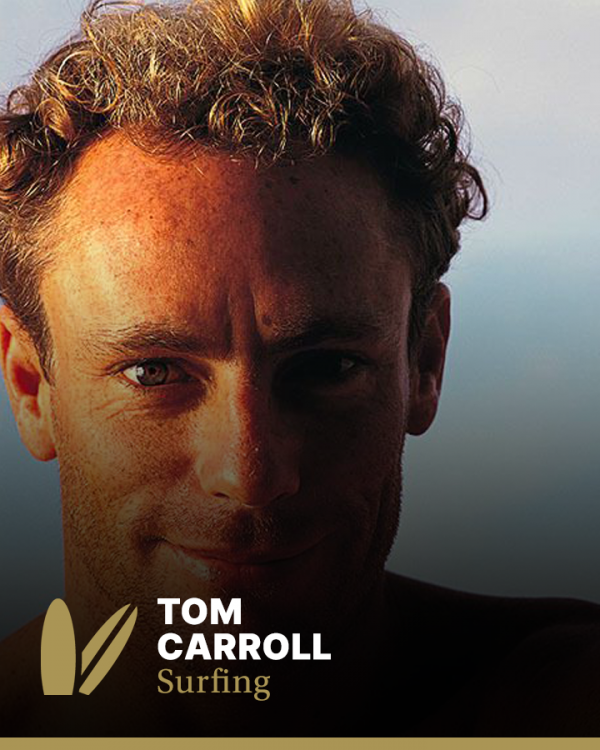 Tom Carroll was inducted into the Sport Australia Hall of Fame in 1992 as an Athlete Member for his contribution to the sport of surfing.

At the age of eight, Carroll first stood on a tiny Coolite. Under the influence of Narrabeen’s Col Smith, the diminutive goofyfoot tore through the amateur field and was destined to become a pioneer in the sport’s professional evolution – both in the water and on the dotted line. Twice champion of New South Wales (Schoolboys in 1974 and Juniors in 1977) and twice winner of the prestigious Pro Junior (1977 and 1980), he joined the IPS World Tour in 1979.

The world looked to be his oyster… until he took a bad fall at a Sydney pub and ripped apart a knee. His doctors told him it would be wise to abandon all thoughts of a professional surfing career. Only intense training and plenty of good luck could overcome a supposed career-ending setback. Undaunted, Tom was the first to adopt scientifically based training principles into surfing. He embarked on a conditioning regimen that not only resurrected his own surfing career, it created the benchmark for fitness in the sport.

After a steady rise in the rankings — from 24th to 17th to 9th — Carroll locked into the top five in 1982 and wouldn’t budge until the decade was out. He attacked all conditions with precision and power, winning in boat wakes at the 1983 Wave Wizards in Florida and in a swimming pool at the 1985 World Inland Pro in Pennsylvania. On the flipside, he dominated the 1982 World Cup at Sunset. As Mark Richards stepped aside, Carroll filled the void, winning three consecutive events and becoming the first goofyfoot to earn a professional world title. He repeated this in 1984 by staving off a late-career effort by Shaun Tomson and putting American Tom Curren’s destiny on hold. Carroll also won the ‘Surfer’ Poll that year, proving he was a surfer’s surfer and the people’s choice.

In 1985, he proved himself to be a man of strong principles and took a personal stance against South Africa’s policy of apartheid, boycotting that leg of the tour.

By the late ’80s, while fighting to reclaim his lost title, Carroll became the acknowledged master in Hawaii. His ascendancy at Pipeline, from finalist in his first attempt in 1979 to the first three-time Pipe Masters champion, bridged the gap between Gerry Lopez and Kelly Slater. His first win, in 1987, was driven by pure emotion the day after his sister died in an auto accident. In 1991, in perfect 8 to 12 foot surf, he executed the most committed late drop and the heaviest ‘under-the-lip’ snap in history to stamp his supremacy on the wave. Carroll’s performances were equally dominant at Sunset, Haleiwa, Rockpile and later along Hawaii’s outer reefs.

Throughout his career, injuries kept him from full potential. Beginning with an infected fin gash in Bali in 1978, he suffered a stomach rupture in 1979, knee reconstruction in 1981, multiple ankle ligament tears, various cuts, lower-back strains and a concussion in 1996. His strict training regimen on tour saved his career several times.

He was the first surf rider to surpass $300,000 in career earnings and in 1988, when he appeared set to reclaim his crown, Carroll earned surfing’s first million-dollar contract for five years with longtime backer Quiksilver.

During Carroll’s 14 year tenure on the world tour, he accumulated 26 victories (second only to Curren), finished in the top five nine times and never wavered as the most powerful surfer on earth. Recognised for his great consistency in championship events, he was the world leader in the number of man-on-man heat victories and career finals. He won at least one senior tour event each season for 10 consecutive years (1982 to 1991), and shares with Curren the record for 23 consecutive man-on-man heat wins.

In the sport’s most challenging arena, Hawaii, he was without equal, proving the old maxim: it’s not the size of the dog in the fight, it’s the size of the fight in the dog. A small guy with huge power, a diligent competitor, the two-time world champion reached the pinnacle of the sport and true legend status.