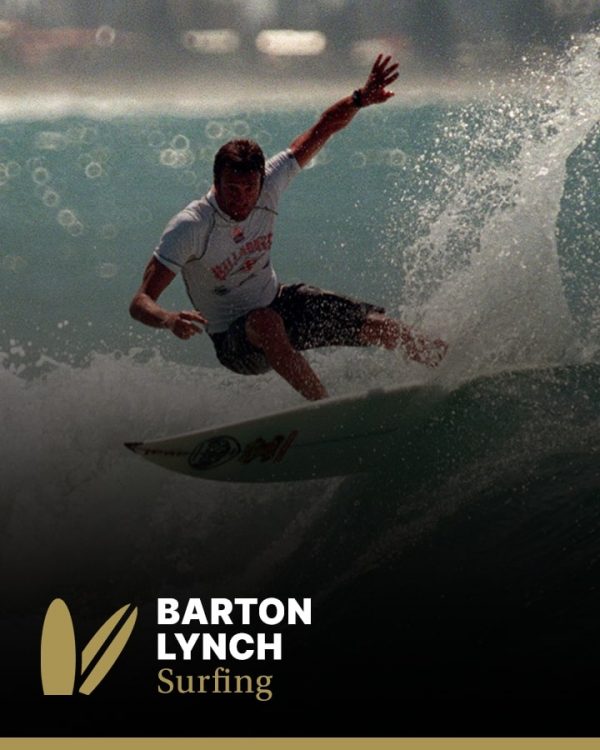 Barton Lynch was inducted into the Sport Australia Hall of Fame in 2000 as an Athlete Member for his contribution to the sport of surfing.

Lynch emerged from the beach breaks of Manly with a flexible style and a fiercely competitive drive, which helped him achieve an impressive junior career and then win the surfing world title in 1988.

Raised in the leafy, quiet suburbs of Sydney’s northern beaches in Australia, Lynch’s propensity for surfing became clear early on. After his father died in a motorbike accident, 11-year-old Lynch promised his mother that he’d become a world champion surfer.

The eldest of three boys, his rise was due largely to his father’s early influence. His dad, a policeman and the captain of Whale Beach Surf Club, introduced his nine-year-old to the ocean and seeded determination in his son by telling him to “persevere” during his first-ever surf session. Those words stuck with Lynch for life.

Shortly after his father’s death, the family relocated to Mosman, an inland Sydney Harbour suburb, which made getting to the beach a daunting task. The gregarious teenager befriended other surfers at his new school, and despite their scepticism about his ability, let him tag along.

Once at the beach, their doubts were erased when he blew them out of the water. Lynch left school at 16 to turn pro. At the time, it was a relatively unproven career path, but he plowed ahead. After a short period of post-school teenage rebellion, he entered and won the world’s most prestigious junior contest — the 1983 Pro Junior.

He refined his competitive act into a new flawless, fluid routine of vertical manoeuvres that brought him immediate success on the Association of Surfing Professionals (ASP) World Tour. Breaking into the ASP Top 16 in his tour debut, he performed brilliantly, but seemed destined to remain wedged between the more fancied names of the time. He finished runner-up to Tom Curren in 1985, but 1986 was not a successful year for Lynch.

In 1987, he finished third, but in 1988, the year of Australia’s bicentennial celebrations, Lynch silenced the world and his big-wave critics with a stunning finale at the Billabong Pro. At perfect 10-foot Pipeline, as former champions Tom Carroll and Damien Hardman fell by the wayside, Lynch clinched the title in the semis and went on to win the event — fulfilling the childhood promise to his mother. His consistency and drive saw him spend 13 consecutive years in the elite Top 16 rated surfers, earning a reputation as a tactical competitor as well as a forthright and articulate spokesman for the sport.

Despite the ensuing influx of young talent, Lynch managed to remain competitive well into his 30s. When he won the Rio Surf Pro in Brazil at age 32, he was the oldest surfer to win an event. He retired from competition in 1998 after 15 years on the ASP tour.