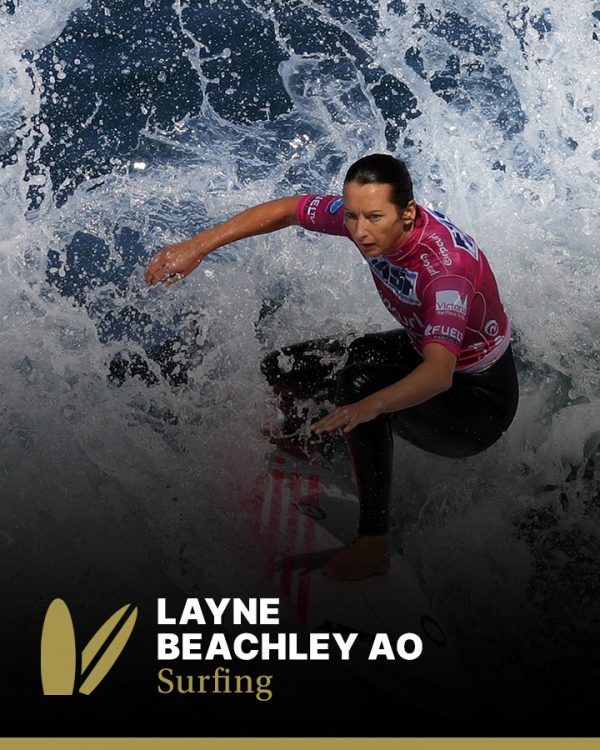 Layne Beachley was inducted into the Sport Australia Hall of Fame in 2011 as an Athlete Member for her contribution to the sport of surfing.

Seven world titles in nine years (1998-2006) and 29 elite tour victories are ample testimony to Beachley’s place in surfing as a competitor, but understate her enduring impact on the sport. She spent 15 years as a director of the Association of Surfing Professionals, remains on the board of Surfing Australia and hosts the world’s richest women’s surfing event. Perhaps the most telling evidence of her impact is that today half of all enrolments at Learn-to-Surf are women. Few champions have left such a mark on their sport. She has created her own foundation to help young women pursue ambitious goals.

Born to a young single mother, Layne was adopted by Neil and Valerie Beachley, who lived at the Sydney beachside suburb of Manly, but Valerie died six years later and Layne was largely raised by a family friend. However, she shone as a surfer at Manly and by the age of 15 was competing -and succeeding — against men. Some credit her later strength and big wave ability to this early robust competition.

At 16 she turned professional and by the age of 20 she was ranked sixth in the world.

The following year (1993) she won her first ASP World Tour event, the Diet Coke Women’s Classic, at Narabeen NSW. In Easter the following year she took out the women’s title at Bells Beach. These were to be but the first of 29 tour victories.

She won her first overseas tour event (the Rip Curl Pro) in France in 1995 and the in 1996 stamped herself as a world championship contender with four tour victories.

In 2004 she was given the rare accolade of being given a wild card to allow her to compete against the men in the Energy Australia Open.

She won her seventh and final world title in 2006 aged 35, and in 2008 announced her retirement. Seven world titles -six of them in succession -remains a benchmark in women’s surfing.

It was fitting that when Beachley relinquished her world title in 2007 it was to another Australian, Stephanie Gilmore. Layne’s flair and fame over the previous 18 years had ignited the enthusiasm of young women across Australia for surfing so that today more than half of all Learn to Surf enrolments around Australia are from girls and women.

Layne served 15 years on the Board of the Association of Surfing Professionals and is a current board member of Surfing Australia.

Away from the surf she has founded her own clothing brand and set up the Aim For the Stars Foundation to help girls across Australia reach high goals. She has given her time generously to other causes and been Ambassador for the National Breast Cancer Foundation, Network Seven’s EcoFocus, Day of Difference Foundation and Planet Ark.

2005: Named Extreme Female Athlete of the Year
2006: Inducted into the USA Surfing Hall of Fame
2006: Inducted into the Australian Surfing Hall of Fame
2015: Named as Officer in the Order of Australia (AO) for distinguished service to the community through support for a range of charitable organisations, as a mentor for women in sport, and to surfing as a world champion competitor.