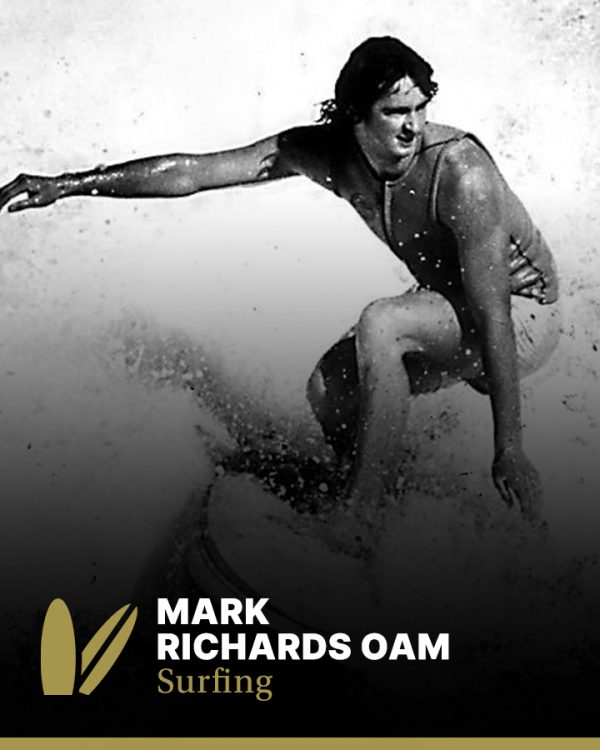 Mark Richards OAM was inducted into the Sport Australia Hall of Fame in 1985 as an Athlete Member for his contribution to the sport of surfing.

To kids today, Richards is the guy whose record Kelly Slater broke. But not long ago, Richards had another title, that of the greatest surfer of all time. So dominant was he, that no one regarded him with anything but awe, even as he paddled out in a silver wetsuit with a Superman logo on his board.

Despite his beginnings as a gangly kid with an unorthodox style, Richards would go on to claim four world championships, win prestigious events in huge Waimea and Sunset (Hawaii) and the Pipeline Masters, pave the way toward acceptance of the twin fin design, and become one of his country’s greatest sports heroes -all with graciousness and humility. Along the way he became a master board shaper, a successful businessman, and a role model for thousands of young Aussie surfers.

Born in Newcastle, Australia, Richards was surfing by age six at Mereweather Beach, and his Dad’s car dealership eventually transformed into a surf shop. His parents surfed a bit themselves, but the majority of early inspiration came from fellow Aussie Nat Young.

On the Australian amateur circuit, Richards routinely surfed in and won the age group above his own. Never keen on travelling for surf, he preferred to go out at home in Mereweather, no matter what the conditions. Professional surfing still hadn’t been introduced, so as Richards rose through the ranks, his only goal was an Australian senior title.

Overcoming a tall physique that included muscular legs, a slight upper-body, wing like arms, and an impossibly long neck, he was jokingly dubbed “the wounded seagull.” That such an unflattering nickname came to represent innovation and excellence is testament to Richards’ influence on the sport. Knees together, hands upturned, and chin thrust forward, Richards could be picked out of a crowd from a mile away, arms spread wide from the moment he stood up, the typical Richards ride began with a swooping drop-in, a tightly crouched bottom turn, and a spray-chucking, almost drop-kneed snapback off the top.

Richards became a keen competitor after working his way through schoolboy, amateur, cadet and junior events. He finished second to Terry Fitzgerald in the Australian titles open division while still a junior in 1973. Around this time a few prize money events started to appear around the world, and it was a logical step for Richards to give these a try.

Competing selectively up until 1980, mainly in Japan, Hawaii, and Australia, Richards was concentrating on two careers; pro surfing and shaping. But it was in the groundbreaking winter of 1975 when Richards was on the front lines of the Hawaiian north shore with Rabbit Bartholomew, redefining the limits of performance surfing. Riding lightning bolt single fins, his wins in both the Smirnoff and the World Cup helped bust down the door of Hawaiian supremacy.

As it turned out, the rise of pro surfing coincided with that of Richards. In 1976, he won the richest event on the fledgling International Professional Surfers (IPS) tour, the Coke Surfabout in Sydney, but he hovered near the top for three years before putting it all together.

After the fourth win in 1982, Richards retired from competing full-time, retreating back to Newcastle, where he shaped boards and worked in his surf shop. He continued to compete in selected events until 1986, again mainly in Hawaii, Japan and Australia.

In 1985, Richards arrived back on the surfing scene, on the Hawaiian north shore for the Billabong Pro. He dominated the early rounds at Waimea and finished the job at Sunset. The next season, at nearly 30 years of age, he won it again. In the world’s most challenging arena, he met the alleged new guard and gave them a clinic. It was a perfect encore.

Richards still runs the family surf shop in Newcastle, and is a masterful shaper. He returned to competition in 2001 to claim victory in the World Masters Championships over 40 division in Ireland, taking down all his old foes and inching ever closer to Slater, the only person with more world titles.

1994: Awarded the Medal of the Order of Australia (OAM) for services to surfing