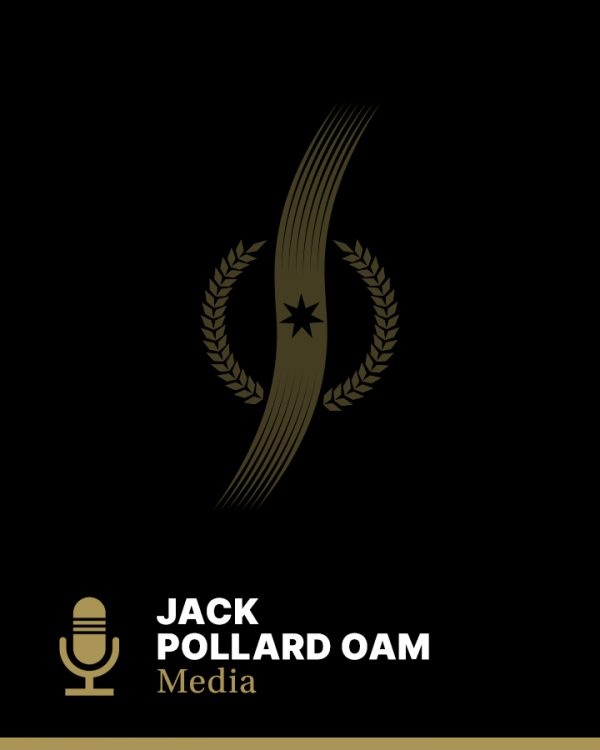 Jack Pollard was one of Australia’s best known sports journalist with a career spanning over 40 years. Many senior sports journalists regard him as having laid the foundations of Australia’s sporting history. Pollard was a good cricketer, and rugby union halfback, though a foot injury and the outbreak of war limited his playing to first-grade level.

At 16 he became a copy boy at Consolidated Press with his life long mate Harry Gordon. At 18 he was called up to the army, but an accident while playing rugby for the army may have saved his life. Three broken toes forced him to spend nine months at a base at Holsworthy, while many in his original platoon were killed in action in New Guinea. Pollard was then sent to Japan and was made sports editor of the armed services newspaper.

In 1947 he returned to Sydney and then travelled to England, finding work as a racing writer for a paper in Sheffield. The following year, he joined the Australian Associated Press and covered the Australian ‘Invincibles’ cricket tour, the London Olympics, and the Berlin airlift. Shortly afterwards he joined Frank Packer’s crew which boasted fellow writers George Johnston and Donald Horne. He reported from Wimbledon for ten seasons and covered the 1952 Helsinki Olympics Games and the Australian cricket tour in the same year.

The Packer group brought him back to Australia for the 1956 Melbourne Olympics. On his return, Pollard edited Australian Sport magazine, Australian Outdoors and founded Ampol’s Sporting Records. For some years, he ran his own publishing company, specialising in sport and leisure titles, before retiring in 1981 to concentrate on writing.

In 1992 Pollard was awarded the Medal of the Order of Australia (OAM) for his service to sports journalism and sports history.