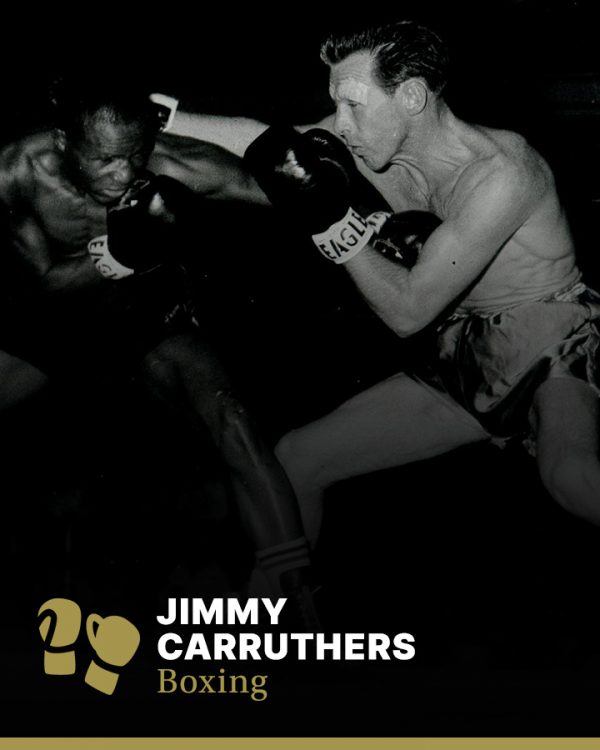 Jimmy Carruthers was the first world champion boxer in any division to retire without a loss or draw. A quick moving left hander, he represented Australia at the 1948 London Olympics. In 1952, he won the British Commonwealth bantamweight title.

At the Olympics, he looked a likely winner in his division after an impressive passage through his first two encounters, but had to withdraw after suffering a gashed eyebrow against the eventual winner, Hungary’s T Csik.

After turning professional in 1950, and with Bill McConnell as his trainer, Jimmy Carruthers first won fourteen straight fights before defeating Vic Toweel to claim the world title in Johannesburg. He was the world bantamweight champion from November 1952 until May 1954.

Carruthers defended his title four months later, knocking out Toweel, and then defeated American Henry ‘Pappy’ Gault in November 1953 at the Sydney Sports Ground in front of 32,500 spectators, the largest crowd to watch an Australian boxing contest.

Defending his title a third time, Carruthers and opponent Chamroen Songkitrat fought a classic bout in Bangkok, Thailand in 1954 in the middle of a monsoon. The fight was scheduled at an outdoor venue. Rather than disappoint the crowd, both fighters removed their shoes for better traction on the slippery canvas and boxed barefoot in the monsoon rain. After defeating Songkitrat, Carruthers retired.

He made a brief comeback in 1961 to lose his unbeaten record, losing four bouts. He later became a leading boxing referee.