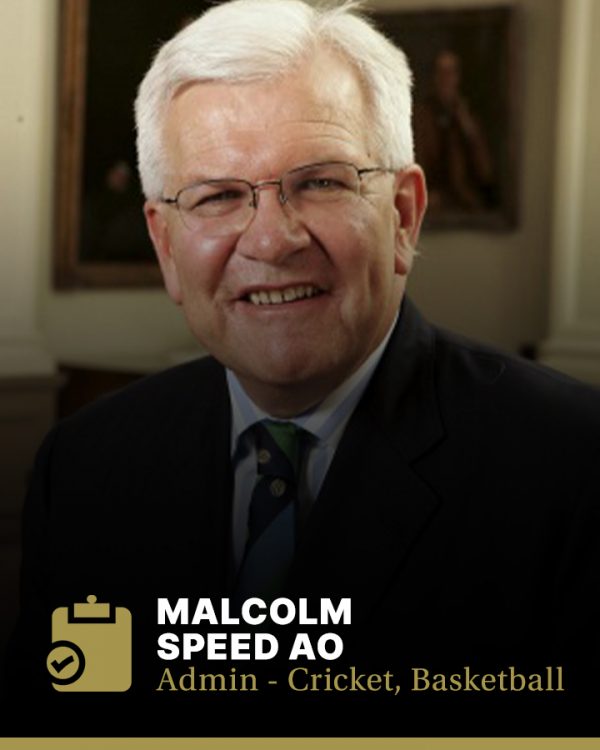 Malcolm Speed AO was inducted into the Sport Australia Hall of Fame in 2012 as a General member for his contribution to administration in the sports of basketball and cricket.

Malcolm Speed has had a key role in the shaping of two sports – basketball (notably at a national level), and cricket at both a national and international level. His training was law and he was a barrister in Melbourne before his interest in basketball—developed as a very competent club player – led him into sports administration.

He was executive chairman of Basketball Australia and CEO of the NBL from 1980 to 1997, a period which is widely seen as the sport’s golden age in Australia. On court, Australia emerged as a major basketball force, but the impacts were even more dramatic off-field, with the sport gaining a national audience and commercial support.

Malcolm Speed was inducted into the NBL Hall of Fame in 2000 in recognition of his role in these developments.

In 1997 he was recruited to become CEO of the Australian Cricket Board, Once again his leadership was marked by both on field success for Australia and sound administration.

In consequence, in 2001 he was invited to become CEO of the International Cricket Council based in London.

He took the helm at a particularly demanding time: The audience for cricket (and the associated revenues) were enjoying dramatic growth on the sub-continent, notably in India but also Pakistan and Sri Lanka. This created new opportunities for cricket and for cricketers, but the shifting financial balance was also reflected in a greater assertiveness by these nations, perhaps interwoven at times with frictions underlain by historic roots in racism and post-colonialism.

Further complicating matters was the massive rise in gambling on cricket, which led in turn to allegations of match fixing and cheating and these at times became sensitive and polarising issues in the international cricket community.

In this environment Malcolm Speed’s legal training and his reputation for independence and integrity were undoubted assets, even if they were not universally welcomed. Allegations of impropriety are always touchy issues and they become even more so when they can be seen to reflect on a nation’s image.

Notwithstanding these complications the ICC, under Malcolm Speed’s leadership, was able to see cricket into a new commercial environment in which the Twenty-Twenty form of the game has become a significant force and intermeshed this with an ever-growing international schedule for more traditional forms. They have been defining years.

In 2008 he returned to Australia and became a Board Member of Golf Australia and Managing Director of the Coalition of Major Professional Sports and Participation Sports, Inc.

In addition to his high profile involvement at critical times in the development of both basketball and cricket, Malcolm Speed has also served as Chairman of the Victorian Council for Fitness and Health (1993-97) and as a member of the Austrlaiansports Commission (1997-2001).