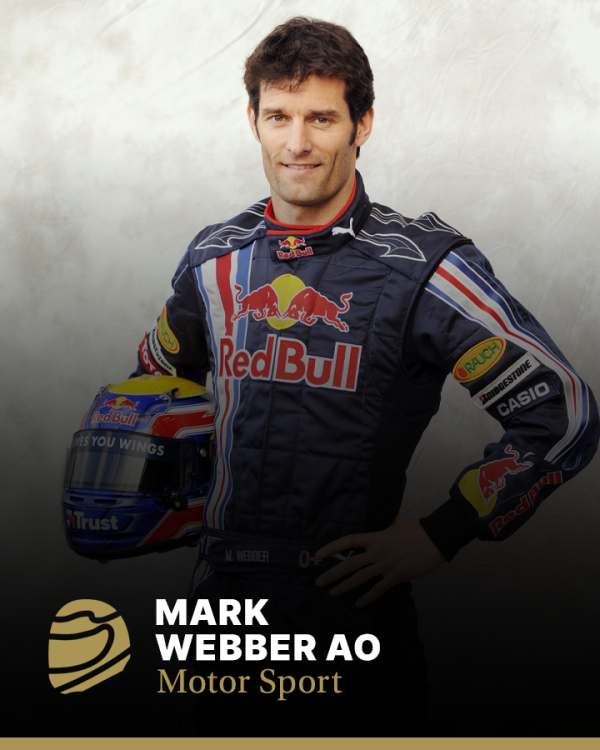 Mark Webber AO was inducted into the Sport Australia Hall of Fame in 2022 as an Athlete Member for his contribution to the sport of Motor Racing.

Mark Webber graduated through the Motor Racing ranks from his native Australia to the United Kingdom before realising his dream of becoming one of the most resilient Formula 1 drivers across 12 seasons and 215 starts.

While he often had to compete in under-performing cars, particularly early in his career, he would go on to score his maiden victory at the 2009 German Grand Prix – the first Australian to win a F1 race since Alan Jones 28 years earlier.

Webber competed for four different teams (Minardi, Jaguar, Williams and Red Bull Racing), winning all nine of his Grand Prix races with Red Bull.  He secured 42 podium finishes and 13 pole positions – a career that stretched from his debut fifth in Melbourne in 2002 to his second-place finish in Brazil in his final Formula 1 race in 2013.

His return to sports cars with Porsche saw him combine with Timo Bernhard and Brendon Hartley to win the 2015 FIA World Endurance Championship.

Mark Webber’s power of persistence and refusal to yield to the obstacles blocking his path drove this laid-back, yet fiercely determined kid from Queanbeyan to the most challenging race tracks of the world.

He became one of the most respected Australian sports stars of his generation, blazing a trail in the hugely-competitive Formula 1 championship in the early part of the 21st century.

The son of a motorcycle dealer and petrol station owner, Webber always felt a need for speed, learning to ride motorbikes even before he went to school. But, with his family concerned for his safety on bikes, he transferred from two wheels to four wheels and made his early mark at the Canberra Kart Racing Club from the age of 13.

In a relatively short time, he won the New South Wales Championships with his competitiveness becoming a trademark almost from the first time he got behind the wheel.

He made his racing car debut in 1994 in the Australian Formula Ford Championships, finishing 14th before improving 10 spots the following year. He and his family did all they could to help fund his endeavours, including Webber working for a period as a defensive driving instructor at Oran Park Raceway.

He moved to the UK to further his career in late 1995 with immediate impact, finishing second in the 1996 British Formula Ford Championships.

Webber continued to put his name forward on the world stage, performing well in the FIA GT Championships and the Formula 3000 Championships, before two horrifying moments in the lead-up to the Le Mans 24 Hour Race in 1999 changed his perspective for a period.

On what he could later dub as a “crazy weekend”, Webber twice flipped his Porsche – caused by a dangerous aerodynamic issue – and as he sailed helplessly through the air on the second occasion, he feared he was going to die. He emerged with a broken leg, serious bruising and understandably more than a few trust issues about the safety of his sport.

He would later tell the Herald Sun: “The second time I crashed at Le Mans it was like “just please turn the lights off quickly — I don’t want any pain”. I was very calm, I thought I was going to die, I just hoped it was quick and painless. Then of course, you realise that it’s over, and somehow you’re still alive.”

In many ways, it would be the making of Webber. After his recovery in body and mind, his ascent continued in the Formula 3000 championship as well as a Formula 1 test driver.

Paul Stoddart gave Webber his first start in Formula 1 racing as he stepped in for Minardi at the 2002 Australian Grand Prix at Albert Park. He didn’t let his fellow Australian down. In a race of chaos and premature retirements, Webber finished fifth in his maiden start, a massive fillip for the local racegoers and a moment big enough to bring Stoddart and others to tears.

Webber switched to Jaguar (2003-2004) and then to the Williams Team (2005-2006) where he competed in underperforming cars, with 10th his best result in a championship season as his motivation levels wavered.,

But his move to the Red Bull Racing team ultimately provided him with the opportunity he had waited for all of his driving life. While he finished 12th and 11th in his first two seasons at Red Bull, there were green shoots of promise, including a third at the European Grand Prix in 2007, and a fourth in Monaco the following year.

In a highly-successful 2009 year, he became the first Australian to win a Formula 1 Grand Prix race in almost 30 years, following on from Alan Jones’ victory in Las Vegas in 1980. His maiden F1 win came at the German Grand Prix – at Nurburgring – in his 130th start, which at the time was a record for the longest gap between a debut race and a victory.

He scored a second win in Brazil, which saw him finish fourth in the drivers’ championship.

Making Webber’s achievements even more meritorious was the fact that he carried a titanium rod in his left leg throughout the 2009 season – the legacy of being knocked down by a car when riding a bike at a charity event in Tasmania late the previous year.

He won four Grand Prix races in 2010 – back-to-back races in Spain and Monaco and mid-year races in Britain and Hungary – and he even led the F1 title race for a period, before finishing overall third.

He was third again in the drivers’ championship in 2011, finishing on the podium 10 times, including his sole win for the year in the season-ending race in Brazil.

Webber’s 2012 victories in the Monaco Grand Prix and the British Grand Prix meant he won those signature events on two occasions as he finished sixth in the title championship race. He didn’t win a race in 2013 – his final season of F1 racing – but his consistency saw him again finish third in the drivers’ championships.

Webber left the F1 scene on his own terms, but it was far from the end of his racing career. He would compete successfully for Porsche in the World Endurance Championships across three years, winning the drivers’ championship in 2015.

He was made an Officer of the Order of Australia in 2017 for “distinguished service to motor sport as a competitor and ambassador, and to the community through fundraising and patronage of a range of medical and youth support organisations.”

A self-effacing, modest character who preferred the power of pure racing to the pomp and publicity so often associated with the F1 paddock, Webber was fittingly inducted into the Australian Motor Sport Hall of Fame in 2018 and the FIA Hall of Fame in 2019.