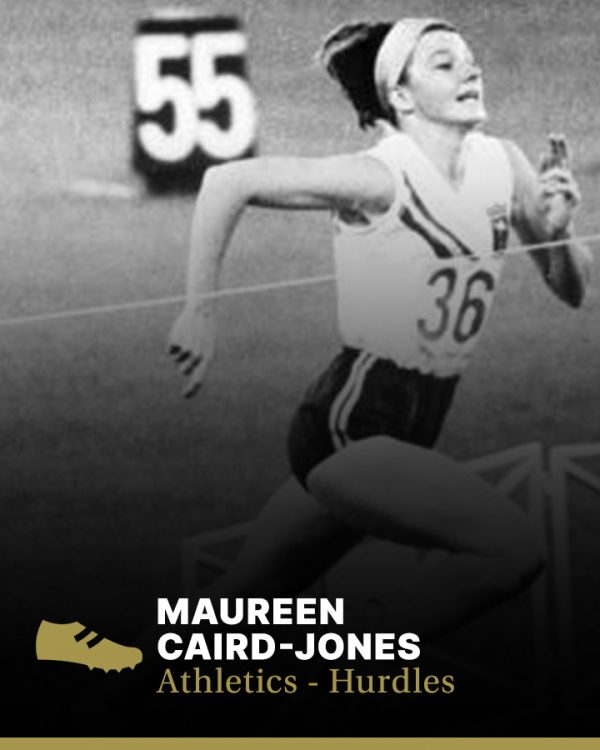 Maureen Caird-Jones was inducted into the Sport Australia Hall of Fame in 1986 as an Athlete Member for her contribution to the sport of athletics.

Only 19 days after celebrating her 17th birthday, Maureen Caird, originally from Cumberland in New South Wales, won gold in the 80m hurdles at the 1968 Mexico City Olympic Games, becoming the youngest ever track and field gold medallist at any Olympics.

Caird was coached by June Ferguson, Betty Cuthbert’s mentor, and had been something of a child prodigy on the athletic track. At the age of nine she was winning titles at primary school, at 13 she won the NSW senior and junior schoolgirl championships over 100yds, and at 14 she smashed the Australian junior record for the 80m hurdles with a time of 11 seconds. In 1967, competing in the NSW titles, she lowered that mark to 10.6sec. Coincidentally, on the same day in Perth, Pam Kilborn won the Western Australian senior title in the same time, one which coincided exactly with the world record Shirley Strickland had set more than a decade earlier at the Melbourne Olympics. Caird was also a champion pentathlete and long jumper at junior levels.

In pre-games competition in Mexico City, Caird had clocked a personal best time of 10.5sec, one tenth of a second outside the world record, but felt she was easing up at the finish. Pam Kilborn (Ryan), who had injured a shoulder in a bad fall in Melbourne just before departure, did not compete before the Games. The two Australian girls won their heats in the fastest times of the round, sharing a new Olympic record of 10.4sec, and went on to win their semi-finals, reducing the final field to eight.

The race plan laid down for Caird by Ferguson was simple but effective: “Reach the first hurdle in front, and you won’t be headed”. In heavy rain, Caird made a better getaway than Kilborn, and led all the way, even though she explained later that she had one unwelcome obstacle to face when a rogue raindrop blurred her vision. ‘I knew the hurdle had to be somewhere there so I jumped and it was all right.’ Caird equalled the world record of 10.3sec to beat Kilborn, the race favourite, for the first time in her career. Kilborn, 12 years her senior, had been undefeated since the 1964 Tokyo Olympics.

After these games, the hurdles distance was lengthened to 100m and the height of the hurdles increased from 2ft 6in to 2ft 9in. This meant that Caird’s time will forever remain an Olympic record.

Caird competed at the 1970 Edinburgh Commonwealth Games, and despite suffering from glandular fever, she still managed silver behind Kilborn. Before leaving for the 1972 Munich Olympic Games, she held the Australian 100m record and the world 200m record. She competed at the Munich Olympics without success and retired immediately after.