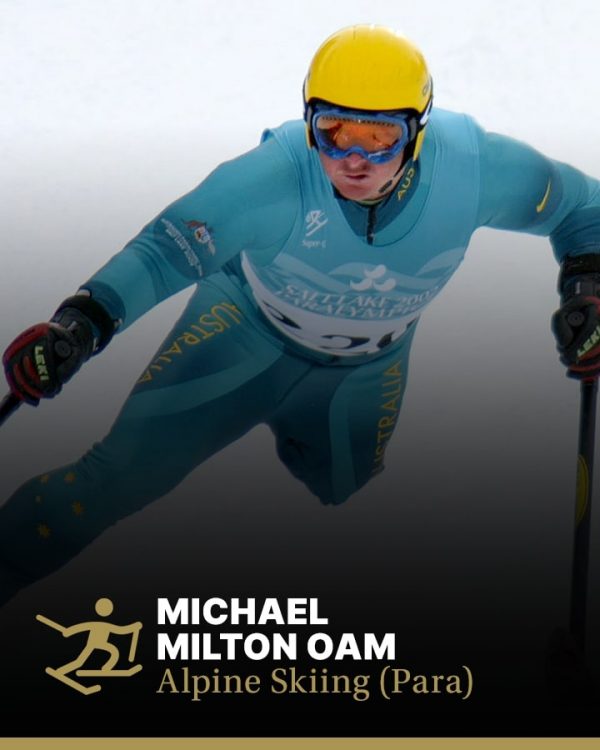 Michael Milton OAM was inducted in the Sport Australia Hall of Fame in 2014 as an Athlete Member for his contribution to the sport of alpine skiing and cycling.

In 2006 Michael Milton hit a speed of 213.65km an hour to make him the fastest person on skis ever in Australia. Not bad for a man who lost a leg to cancer at the age of nine.

But then Michael Milton has never been one to let his disability become a handicap.

He competed in five winter Paralympics between 1988 and 2002 winning six gold, three silver and two bronze medals. He won Australia’s first Winter Paralympic Medal in 1992 and at the 2002 Salt Lake City Games recorded a clean sweep by winning all four alpine skiing events in his class – again a first for an Australian. He also competed in three World Championships winning six gold among his 11 medals.

Those achievements would have been stunning enough, but after taking silver in the downhill event at the 2006 Winter Paralympics in Torino he set his sights on a berth in the 2008 Games in Beijing – as a cyclist. His hopes seemed shattered when he contracted cancer again in 2007 requiring surgery to remove parts of his throat and stomach and debilitating radiotherapy and chemotherapy. Notwithstanding this, he boarded the plane to Beijing less than 12 months later to launch his tilt for a cycling medal. Under the circumstances his 8th in the individual pursuit, 9th in the 1km time trial and 21st in the road race were extraordinary achievements.

Since then he has coached and mentored other Paralympic athletes.

Away from competition his achievements have been no less awe-inspiring. Using crutches rather than a prosthesis he has climbed Mt Kilimanjaro, trekked Kokoda and crossed PNG from north to south. In 2013 he ran the Gold Coast Marathon and set a new world record for an athletes on crutches.

In 2006, to celebrate their 25 year anniversary, the Australian Institute of Sport selected their 25 greatest graduates. It was no surprise to anyone that Michael Milton was among them. He is a phenomenon.