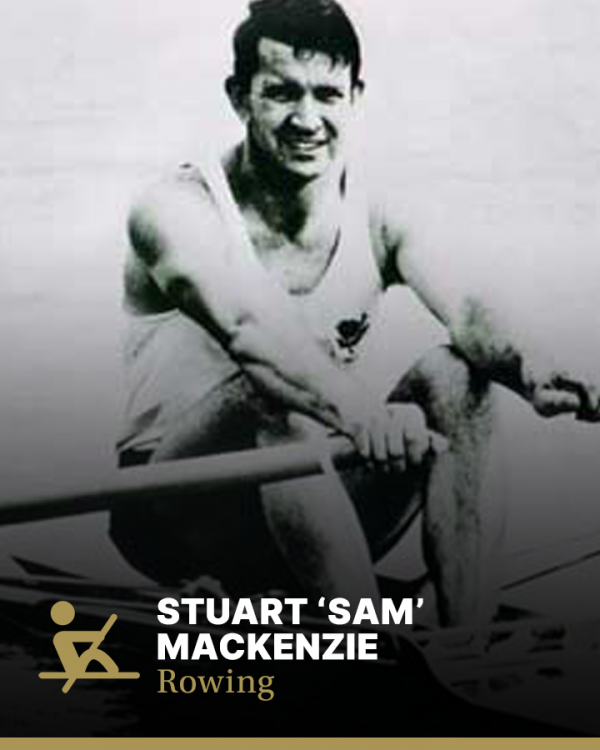 It is more than possible that Stuart Mackenzie was Australia’s greatest single sculler, but a combination of ill health, over exuberance, and lack of Olympic gold medals makes it difficult to be too definite. Standing at 195cms and weighing close to 95kgs, Mackenzie was one of the biggest men in world rowing when he competed during the 1950s and 60s.

Mackenzie was a fine all round sportsman at King’s School, Sydney, and rowed in the school eights. After leaving school he kept up his rowing at club level, and was selected for the New South Wales King’s Cup eight. In the Melbourne Olympic year of 1956, Mackenzie, overwhelmingly super confident even at the age of 19, announced to all who would listen that he had decided to step out of the eights, and gain Olympic selection in the sculls. To a stunned press corps, unused to such bravado, Mackenzie added that should he fail, he would make the Olympic team per medium of his proven skill as a discus thrower!

When Merv Wood and Mackenzie had their showdown at Ballarat prior to the Games, Mackenzie won and failed to say anything sentimental about the old champion and had the audacity to call a press conference. The press were so stunned they attended and turned the brash youngster into a national identity overnight.

The young Australian easily qualified for the Olympic final and led the race with less than 100m to go. But then he seemed to stop paddling. The great Russian champion, Vyascheslav Ivanov, came from behind and won gold. Mackenzie’s explanation was that he had planned to lead throughout the race and put in his final burst, 200m from the finish line. He said officials had placed buoys at 100m intervals for most of the course but changed the placement to 50m intervals for the last 250m. Not aware of this, he counted the buoys and thought he had finished the race when in fact he was still a 100m out. His strength sapped, he could barely pull his oars through the water and Ivanov shot past him for Olympic gold.

Mackenzie was unconcerned about his failure to win the gold medal and blithely announced he was off to England to gain more experience (“…because there’s no competition here…!”)

The following year, 1957, saw Mackenzie come of age as an international rower. He instantly became the most controversial character to ever row at a Henley Regatta, ever eager to upset the ‘old boy’ brigade controlling English rowing. Once he rowed wearing a bowler hat. On another occasion, he stroked away into a vast lead, suddenly stopped to adjust his hat, peered down the river and exhorted his laboring rival to ‘hurry up’. It simply was not done, then and now, and Mackenzie was continually being called before the officials.

Once he objected to the insults being hurled at him by a passenger in an accompanying launch, changed course to pull alongside the launch, where he hurled water over the bewildered passenger, and then rejoined the race, which naturally he won.

His record in Europe and England was just as spectacular as his antics. He won the Diamond Sculls from 1957 to 1962 in one breathtaking six year display of power sculling. He also won the 1957 and 1958 European championships, outclassing his Russian conqueror Ivanov on many occasions. He was the first Australia to win a European championship.

In 1958 Mackenzie effortlessly won the gold at the cardiff British Empire and Commonwealth Games. In 1959, after retaining his Diamond Sculls title, he also won the double sculls with English rower Christopher Davidge, becoming the first man to win both. However he also stood out as the most unpopular winner in the history of the event. He again incurred the wrath of officials by competing in an old and stained singlet and blue track pants. He carried on with his outrageous behaviour.

Bad luck struck in 1959 when Mackenzie was training in Yugoslavia and he was rushed to hospital with a perforated stomach ulcer. He was forced to abandon all training and competition and rest for a year, but vowed he would be at the 1960 Rome Olympics. The challenge of winning three consecutive European championships was too much and Mackenzie signed himself out of hospital to compete. A stone underweight, he struggled to finish fourth. Even though he later won the Diamond Sculls and then the South African title, those closest to him sensed he had lost an edge.

With the 1960 Rome Olympics looming, the Aussie was clearly the best rower in the world. However, when he got to Rome, he took ill and had to withdraw from the competition. His old rival, Ivanov, took out his second consecutive gold medal but Mackenzie had consistently beaten him since 1956. It seemed his career was finished, however, nine months later he won the senior sculls title at Putney, England, and won his fifth Diamond Sculls to equal Lowndes 78 year old record.

Asked to return to Australia to compete in trial races for selection in the 1962 Perth British Empire and Commonwealth Games, Mackenzie told officials just what they could do with their trials.

He continued to race in Europe until 1965 when he raced in the European championships, in the double sculls, and finished eighth. He retired shortly afterwards. He received the Helms Award in 1957.