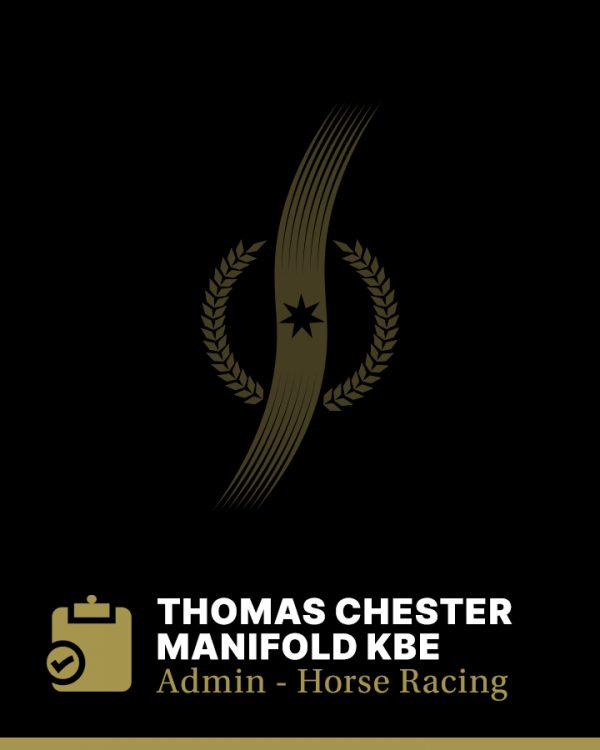 Sir Thomas Chester Manifold was known as the ‘father’ of Victorian racing during his long career in politics and the turf.

Growing up in the Western District of Victoria, Manifold served in both World Wars with distinction. Returning home from the First World War in 1936, Manifold moved back to the family property Talindert with his family and established a racehorse stud. Elected to the Victoria Racing Club committee in 1937 until 1972, he was to win the VRC St Leger with Arbroath in 1953.

It was to racing that Manifold devoted most of his energies campaigning tirelessly against punitive taxation. As Chairman of the VRC between 1951 and 1962, he lobbied for legalisation of the off-course totalisator against a powerful alliance of churches and bookmakers.

Under the premier Sir Henry Bolte, Victoria established Australia’s first Totalisator Agency Board (TAB) in 1961, with rigorous restrictions insisted upon by Manifold, who was appointed Chairman. He saw it as the best means of channelling back into racing, the vast sums of money lost to illegal bookmakers. He remained in the post until 1968, and continued on the VRC Committee until 1972. Manifold was a persuasive advocate and was held in high regard by all sections of the racing industry.

He entered the Victorian Parliament in 1929, was a minister in the Argyle Government, and retired from politics in 1933. His later years were crowned by the achievements of his champion steeplechaser, Crisp. Taken to England for the 1973 Aintree Grand National Steeplechase, the gelding finished a courageous second, three-quarters of a length behind Red Rum.

Manifold was awarded the Knight Batchelor in 1953 for his services to politics and the public. In 1965 he was made a Knight Commander of the Order of the British Empire for his services to horse racing and the community. Manifold’s memory is honoured by the VRC with the annual running of the Chester Manifold Stakes at Flemington.