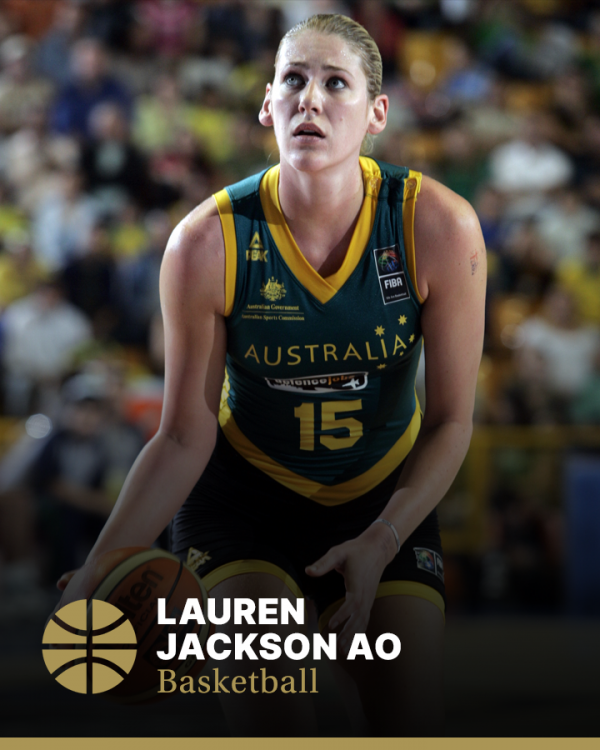 Lauren Jackson was inducted into the Sport Australia Hall of Fame on Friday, December 4, 2020 as an Athlete Member for her contribution to the sport of basketball.

Lauren Jackson is widely regarded as one of the all-time greatest females of Australian basketball. Lauren is a four-time Olympian, having won three silver and one bronze medal, whose success also carried into World Championships where she led Australia to gold in 2006 after successive bronze medals in 2002 and 1998. In the USA Lauren was a key figure in the WNBA where she played for Seattle, winning two championships and three MVP’s and is a seven-time WNBA All Star. At home in the WNBL she is a five-time champion with the AIS and Canberra Capitals as well as a four-time MVP and Grand Final MVP winner and five-time WNBL All Star.

In 2015 Jackson was considered to be Australia’s greatest female basketballer, both for her individual accomplishments and the success of the teams she had played in and captained, and had often been described as the best in the world.

The daughter of parents who both played basketball for Australia, she was born for big things in every sense – with the right genes, with a tall, powerful physique suited to the game, which didn’t take long to become apparent.

Jackson began playing basketball at home in Albury and as a five year old, she told others that she would grow up to play for Australia, as Mum and Dad had, and gave up other sports to concentrate on her dream.

A competitive mindset and mental strength were among her assets from the beginning. When she became upset after injuring a knee in an under 14 country championship match, her parents told her she did not have to keep playing if she did not want to. In response, she went to her room and typed a message on her computer which read: “From this day on, nothing will stand in my way …” and nothing ever did.

She made the national under 20 team when she was only 14 and by 16, she had been awarded a scholarship at the Institute of Sport and had made the Australian team, the Opals, for the first time. A year later, in 1998, she helped the AIS team win the Women’s National Basketball League (WNBL) championship.

Playing both as a forward and centre, she was influential in the Opals winning three Olympic silver medals at Sydney 2000, Athens 2004, Beijing 2008 and a bronze at the London 2012 Olympic Games, the last two as captain. Lauren was awarded the privilege of carrying the flag at the opening ceremony in London after becoming the highest points scorer in women’s basketball Olympic history.

Jackson also led the team to a 2006 world championship gold medal in Brazil, following bronze medals at the two previous editions of that tournament, plus silver at the junior world championships in 1997 and gold at the Melbourne 2006 Commonwealth Games.

Jackson was a superstar in the biggest and best women’s competition in the world, the Women’s National Basketball Association (WNBA), after the Seattle Storm selected her as the overall No 1 draft pick in 2001, viewing her as a franchise player. She played 308 games for Seattle between 2001 and 2012 before injury forced her into retirement, winning two championships and a host of personal accolades, including three Most Valuable Player awards, and earning selection in the All-Star team seven times.

In the WNBL, Jackson played 154 games, winning one championship with the Australian Institute of Sport and four more with the Canberra Capitals. Lauren was named the competitions Most Valuable Player four times and named in the All-Star team five times. She also performed with distinction in the Russian, Spanish, Korean and Chinese club competitions, winning many honours.

Seriously hampered by hamstring, knee and achilles injuries from 2013, Jackson abandoned an attempt to make it to a fifth Olympics in Rio de Janeiro and announced her retirement in March 2016.

In 2011 the Albury Sport stadium was renamed “The Lauren Jackson Sports Centre.” Lauren was awarded the Officer of the Order of Australia in 2015 for distinguished services to basketball as an athlete at national and international level, as a mentor for women in sport, and as a supporter of a range of cultural and social welfare groups. In 2018 Lauren won the International Olympic Committee’s Women in Sport award for Oceania. Lauren was inducted into the Australian Basketball Hall of Fame in 2019 and will be inducted into America’s Women’s Basketball Hall of Fame in 2021 as an International Player.

Lauren authored her first biography in 2018 called “Lauren Jackson My Story” and in 2018 was appointed as Head of Women’s Basketball by Basketball Australia.