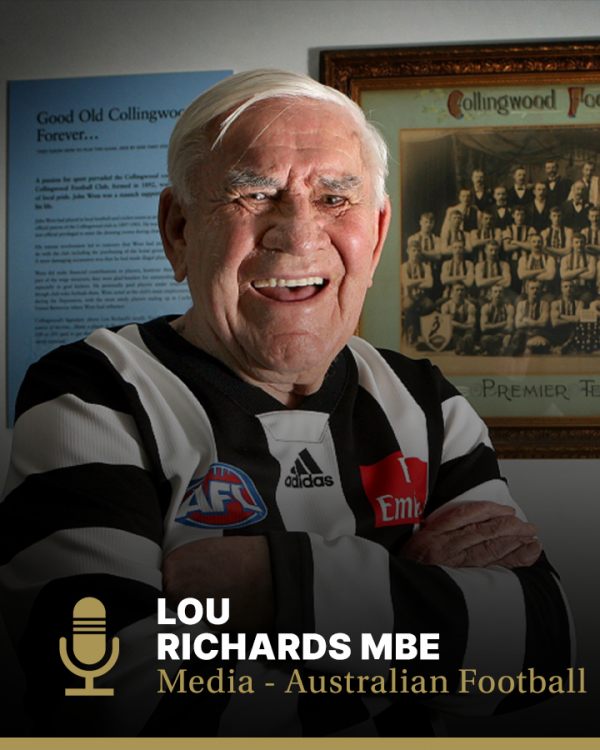 Generations of Australians who never saw Lou Richards kick a ball, still regard him as one of the great personalities of AFL/VFL football.

Over three decades he was a prolific writer of newspaper columns that were filled with cheeky challenges and predictions. He was also a ubiquitous figure on radio and TV where his humour and his banter with fellow panellists turned the once-serious business of football discussion into family entertainment.

This media profile has tended to overshadow his on-field performances, but these were considerable: He played 250 games with Collingwood, captained the club for four years (including the 1953 premiership) and was the club’s leading goalkicker in 1944, ’48 and ’50. He represented Victoria three times.

Lou was born in 1923 into a Collingwood family. His grandfather Charlie Pannam had played for the club and his uncles Charles and Alby also wore the famous black and white. His brother Ron played with them too.

His contribution to the game as a media personality may be even greater. His comments and outrageous promises (” I will cut Ted Whitten’s lawn with nail scissors if they lose”) ensured that his newspaper columns kept the sport on the front pages and earned him the nickname of Louey the Lip

Once TV was introduced he quickly invented a similar outrageous persona, engaging in constant banter with fellow panellists like Jack Dyer and Bob Skilton to make their match previews and reviews ratings-winning entertainment.

Among the media he was also well known as publican (with wife Edna) at the Phoenix Hotel, a popular watering hole for journalists.

Lou Richards and his colleagues set a pattern for making sports shows humorous enough to attract people who were not otherwise die-hard followers and so helped ensure that AFL football would have a special place in the popular culture of Australia’s southern states.

He was a good footballer, but an even greater ambassador for the game.

Richards was made a Member of the Order of the British Empire in 1981, received an Australian Sports Medal in 2000, and was awarded a Centenary Medal in 2001. In 1996 Richards was inducted into the Australian Football Hall of Fame and in 2004, he was named as the captain of the Greek Team of the Century, due to his Greek heritage. He was inducted into the Sport Australia Hall of Fame in 2008.