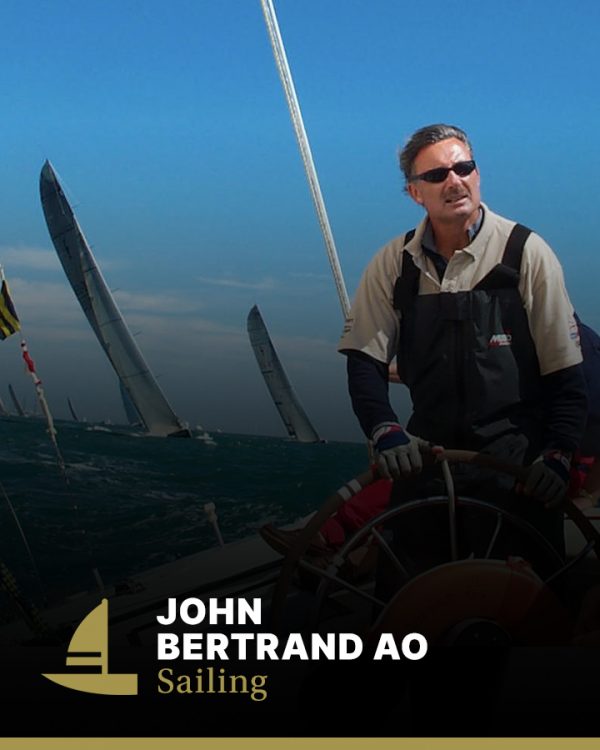 John Bertrand AO was inducted into the Sport Australia Hall of Fame in 1985 as an Athlete Member for his contribution to the sport of sailing, and was Elevated to Legend of Australian Sport in 2013.

Bertrand would have you believe that his main claim to fame is that he is a proud Australian. To his fellow Australians he is much more. He is the Australian who skippered the winged keel Australia II to victory over Dennis Connor’s Liberty to win the 1983 America’s Cup, breaking 132 years of American domination and, in the process, breaking the longest-running record in the history of modern sport. After being 3-1 down in the best of seven races, and considered by some as the ‘Race of the Century’, on September 27, 1983, off Newport, Rhode Island, this final assault on the ‘Everest of sport’ stopped the nation like never before. It is arguably the greatest upset in modern Australian sporting history.

Ask any Australian where he or she was that day, and they will remember.

The Australia II crew’s victory was voted by the Confederation of Australian Sport as the greatest team performance in 200 years of Australian sport.

A world champion and Olympic medallist, Bertrand represented Australia in five America’s Cups, 1970, 1974, 1980, 1983 and 1995, and two Olympic Games, Munich 1972 and Montreal 1976, winning bronze in Montreal in the Finn Class. In over 25 years of America’s Cup campaigning, he was involved in all areas of activity, from skipper of ‘Australia 2’ to Chairman of ‘OneAustralia’.

Bertrand’s love of sailing continues. He actively competes at the highest level within the International Etchell class having won the 2010 and 2016 World championships.

Bertrand is both a businessman and philanthropist. He is Chairman of The Sport Australia Hall of Fame and Chairman of the Prime Ministers Alannah and Madeline children’s Foundation. Bertrand is President and Chairman of Swimming Australia, where he is charged with the responsibility of taking Swimming Australia to a new level of international and Olympic high performance. He is a life member of the International America’s Cup Hall of Fame.

His biography ‘Born to Win’, published in 1985, was at the time the largest-selling biography in Australian publishing history. Bertrand was made a Member of the Order of Australia (AM) in 1985 for his services to sailing. Bertrand was then made an Officer (AO) in 2016 for distinguished service to sports administration, particularly to swimming and sailing, to child welfare, to higher education, and as a mentor of young sportspersons.

Team Spirit is a One-Way Street – Podcast with Blenheim Partners